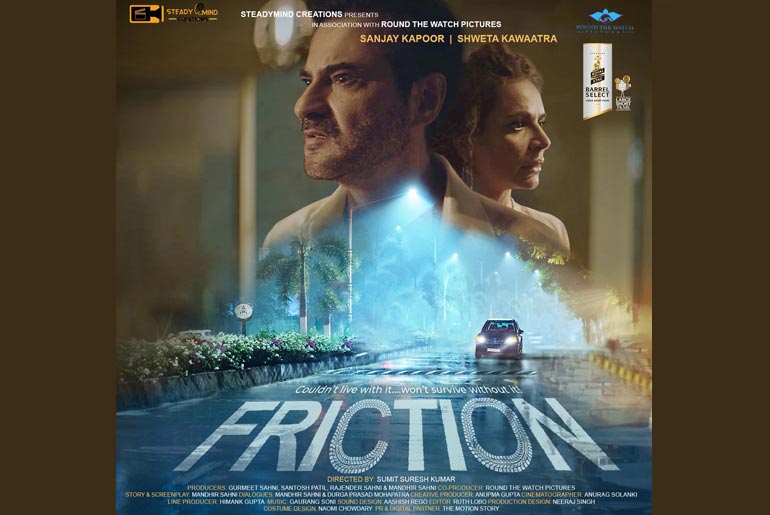 From the makers of ‘Disconnected’, Royal Stag Barrel Select Large Short Films premiered ‘Friction’. Based on a nuclear family, it is a short film wherein small squabbles between a modern-day couple snowball into a larger disagreement. The disagreement further led to a catastrophic end in the larger scheme of things. Friction is directed by Sumit Suresh Kumar and features actors Shweta Kawaatra and Sanjay Kapoor in the lead.

Showcased through a layered theme, the movie is presented via a non-linear narrative from the viewpoint of a contemporary middle-aged couple, Rahul (played by Sanjay Kapoor) and Roskija (played by Shweta Kawaatra), and their 10-year-old son Rishi. A phone call from ‘Roski’ sends Rahul on a whirlwind journey spanning the happenings in his past! What ensues, alters the three lives forever – in ways that no one can fathom. In the end, Rahul is left to ponder over what he wishes would have been versus what has become.

Talking about ‘Friction’, Sanjay Kapoor, said, “Royal Stag Barrel Select Large Short Films has always been a great platform to take extraordinary stories to the masses. I am excited to see what our audiences interpret of this brilliantly written piece. For me, it’s a reminder about being thankful of the seemingly mundane routines of our day to day lives. It serves as a great reminder about how things can get fatal, if not consistently taken care of.”

Shweta Kawaatra said, “The film is aptly summarized in this line ‘Couldn’t live with it, won’t survive without it’. It’s a tale of how internal friction can make and at the same time break relationships and families, if not paid adequate attention to.”

“Friction, while traditionally accompanied with a negative connotation with respect to relationships, ironically has a very positive impact in maintaining a healthy equilibrium. It represents the effort being made by the individuals in the relationship. The short explores these finer aspects through a non-linear narrative set in the backdrop of wet Mumbai roads”, added Writer and Producer Mandhir Sahni