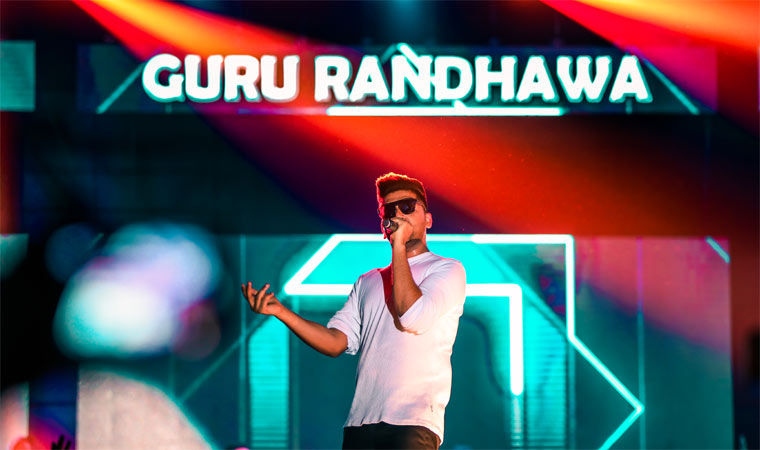 Bollyboom kicked off its much anticipated multi city tour with the popular and celebrated artist Guru Randhawa in Ahmedabad on 26th May 2018 and Bhubaneshwar on 27th May 2018 to packed crowds.

It was a memorable weekend as Guru Randhawa played his popular tracks including ‘High Rated Gabru’ which has already crossed 345 Million+ views, ‘Ban Ja Rani’ from the movie Tumhari Sulu, ‘Yaar Mod Do’, ‘Patola’, ‘Fashion’, and ‘Lahore’. His impromptu on-stage dialogues and witty interactions with the audiences combined with an evening of high octane Bollywood chartbusters made for an unforgettable show. The Arena by Trans Stadia venue in Ahmedabad and the Janata Maidan in Bhubaneswar on 26th and 27th May respectively witnessed thousands of fans throng the grounds.

In addition to the foot tapping live musical entertainment, Bollywood music fans were awestruck by the holistic unique Bollywood live entertainment experience which included live percussionists, exotic performers, visually mesmerising SFX and state of art Technology. The event offered guests a curated F&B experience which made for an entertaining and memorable weekend.

On the occasion of his super successful sold out shows across Ahmedabad and Bhubaneswar, a visibly ecstatic Guru Randhawa said, “It was the crowds love and energy that made the show a great success. I was very delighted to see fans cheer to their fullest, bringing the most electrifying atmosphere to the High Rated Gabru Tour in Ahmedabad and Bhubaneswar. I’d like to thank each fan out there for coming and singing every song loud with me.”

Commenting on the success of the debut Bollyboom India Tour with Guru Randhawa, Manuj Agarwal, CEO, Percept Live commented, “Guru Randhawa enjoys massive popularity and the audiences in Ahmedabad and Bhubaneswar simply loved grooving to his songs at the live Bollyboom show. Guru Randhawa is  clearly is one of the biggest and the most popular artists in the country right now following the magnificent success of songs like Lahore, Ban JaTuMeri Rani, Patola and Suit Suit, and this was further endorsed by the overwhelming attendance on ground.”

Manuj Agarwal further added, “We are committed to making Bollyboom the biggest Bollywood Dance Music IP in the country. We are fortunate to have already received tremendous support from our sponsors like Kingfisher Storm (5 Cities), 8 PM (Lucknow), Red Bull (9 Cities) and several other partners, with each city concert having multiple local sponsors as well.”

Bollyboom is an existing Intellectual Property, which belongs to Percept Live, a forerunner that introduced a new genre called Bollywood Electro Music, a fusion of Bollywood music and electronic sounds in the festival market in India since 2013. The first editions have seen live performances by Sonu Nigam, Salim-laiman, Shaan, Shveta Pandit, Shraddha Pandit sharing the platform with DJ Lloyd, DJ NYK and Acid in various cities such as Mumbai, Delhi and Jaipur.

In the second edition, Bollyboom did events such as Bollyboom Holi Bash 2017 and another in 2018 with an accumulative attendance of over 10,000. Another massive event called Bollyboom NSCI Nights which pulled a crowd of over 4,500 Bollywood music enthusiasts with DJ Raftaar, DJ Aqeel, DJ ShilpiSharma, DJ Zulfi Syed and DJ Aman who rocked the NSCI Dome at Worli In 2017. Last year Bollyboom hosted a pop up party offering customers a unique fresh and an exclusive nightclub experience, along with an exclusive guest list and an unforgettable experience at Marriot in Mumbai. Apart from arenas and Pop-ups Bollyboom has hosted multiple club nights in various metro and tier 2 cities. ‘Bollyboom’ is known to provide a unique live entertainment experience for Bollywood music fans and is seen in different variants across the country.