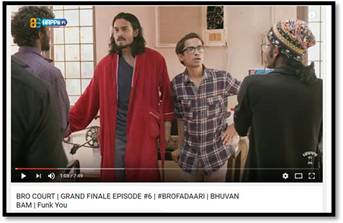 Bro Court is one-of-its-kind humorous spectacle which explores the complexities of college life. The story revolves around “Bro” aka BB Ki Vines aka Bhuvan Bam & his wacky solutions, to the wackier situations that other Bros face in an engineering college has already got over 7 million views from its first 5 episodes.

Funk You known as the biggest pranksters in the digital world with over 8 million followers on Facebook & over 0.7 million subscribers on YouTube are all set to bring a humorous twist to the highly successful web-series “BRO COURT” where they are seen challenging the rules set by Bro. In this episode “Bro” goes head to head with “Funk You” to bring the pranksters to justice for breaking the rules of the Bro Vidhaan.

Bhuvan Bam having recently won the fastest growing YouTuber award with over 2.5 million subscribers will for the first time ever be sharing screen space on Happii-Fi with another YouTuber. Having made their audience laugh with their videos & pranks the two are set to take the this season to a new level and by having them on a single platform together for the first time Happii-Fi is set to create new benchmarks for the digital world.

Emphasizing on this association, Mr. Manav Dhanda, Group CEO SABGROUP says that, “We are happy to see the success and growth speed of our channel clocking in close to 10 Million views in less than 3 months. With our legacy of comedy, we always intent taking content and comedy a notch higher and hence bringing the two digital celebrities of such high stature in our season finale only extends our promise of making you laugh. Happii-Fi has set a new benchmark for the digital world.”

You could see the episode on the following link: https://youtu.be/zSnBnusoatM

TAGEntertainment
Previous PostKSS marks its presence in the state of Chattisgarh with opening of miniplex in Durg Next PostAmazon.in launches ‘Amazon Classroom’ for new sellers