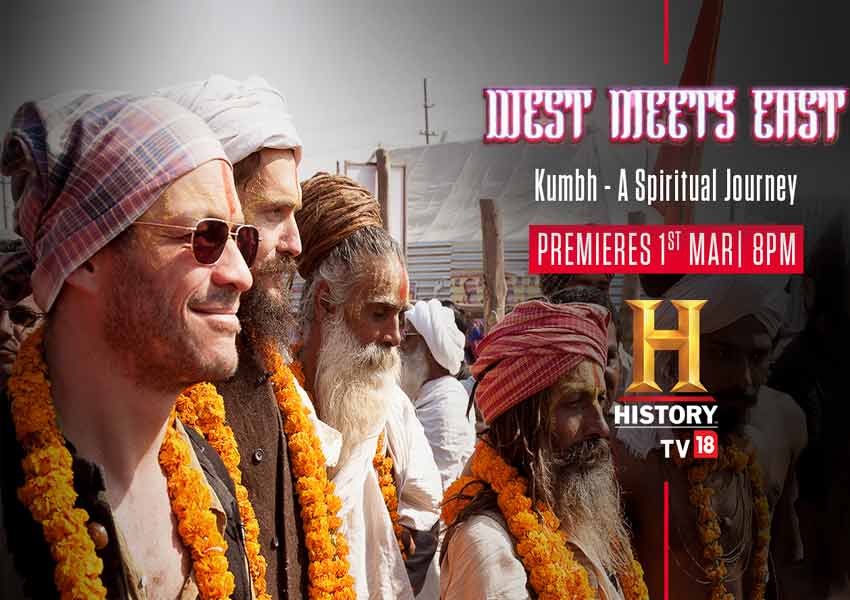 Did you know ‘Kumbh’ actually means nectar. Legend has it that in order to restore peace, Lord Brahma advised all the Gods to churn out the nectar of immortality and that this nectar is said to be accessible during the Kumbh Mela. Join actor Dominic West in his visit to the Kumbh to bathe in the River Ganges with his school friend Dr. Jim Mallinson and 30 million other pilgrims this March on HISTORY TV18 Friday 8 PM.

Kumbh Mela has been an inspiration and spiritual journey not just for the Indians but for many westerners as well. The documentary “WEST MEETS EAST” tracks the journey of Mallinson and West as they travel to northern India where the festival takes place.

It affords some special access and insight into what has grown to become the largest gathering of humans worldwide. Dr Mallinson takes his old friend to live with his own sect of Sadhus and Dominic is granted permission to take part in a unique event, James’ ordination as a ‘Mahant’, a cross between an abbot and a brigadier – the first time a westerner has received this honor in this ancient order of master yogis. The position is permanent and requires James to attend every Mela to give a feast.

Watch how this unique filma spiritual journey that changes both men as they immerse themselves in the vast crowds and see the power of mass devotion up close on  HISTORY TV18’s West Meets East premiering on 1st March 8 PM.