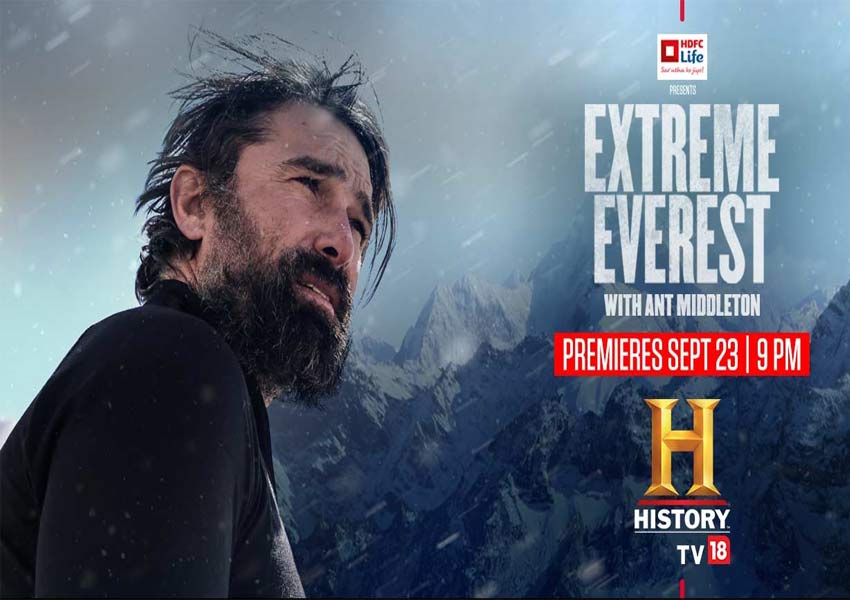 To conquer the world’s highest peak has been an unquenchable desire that has fascinated generations of men and women around the world. Since Edmund Hillary and Tenzin Norgay in 1953, thousands have successfully scaled the summit of Mt. Everest, while hundreds have also lost their lives on the treacherous climb. HISTORY TV18 presents ‘Extreme Everest with Ant Middleton,’a blow-by-blow account as the former soldier and adventurer takes on the ultimate challenge of conquering the unforgiving mountain.

The Sherpas know that Mt. Everest, or Chomolungma as they call it, is as spectacular as it is cruel. The weather changes so suddenly that the risks are almost impossible to calculate. The unfathomable depths of its crevasses and the relentless icy climb,test Ant Middleton’s limits. Despite a military career spanning 15 years, having served in the Holy Trinity of UK’s elite Special Forces- 9 Parachute Squadron RE, Royal Marines and Special Boat Service –,climbing the Everest would be a challenge like no other.

Watch his adventure, as cameras follow him every step of the way from Kathmandu, to the summit in the enthralling documentary. Get an up close perspective of what it takes to survive the climb, from Everest Base Camp, through the stunning Khumbu Valley to the Hillary step and on to the top of the world. The feature length documentary also presents an inside view of life at the seasonal tented town 5,300 metres above sea level. Ant meets the extraordinary community of Sherpas, who brave the elements to earn a living in unforgiving conditions. The show is as much about facing fears and carrying on, even when life and death hang in the balance. In a particularly climactic point in the narrative, Ant Middleton and the crew encounter extreme danger, as he, his film director and the Sherpasare trapped in an unexpected storm, close to the summit.Find out what happens, on this remarkable real-life, action packed adventure.