HistoryTV18 showcases, Kumbh: Among the Seekers 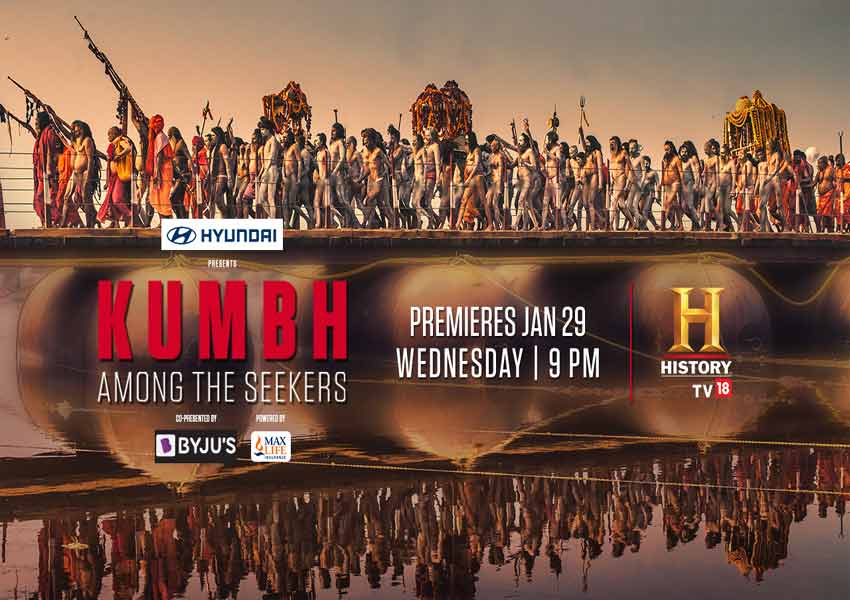 Adding to its rich offering of Indian originals, HistoryTV18 presents a one-hour special about the world’s most spectacular human gathering, the Kumbh Mela. The incredible festival is widely known to be the largest peaceful gathering on the planet. According to official estimates, a staggering 240 million people converged on Prayagraj, formerly the city of Allahabad, over two months. That’s more than three times the number of people that came to New York, the world’s most visited city in 2019, over the entire year! The documentary takes viewers among the believers and behind the scenes of the Kumbh Mela, to find human stories, present jaw-dropping facts, and take a closer look at the gargantuan logistics of the world-famous mega-event. While decoding its present-day avatar, the multi-dimensional narrative also traces the known history and enduring folklore of the centuries-old fair.

The original production, almost a year in the making, captures the breathtaking spectacle of the Kumbh – from build-up, through key phases, to the final day of the seven-week long Mela. Filming by day and night in high definition and 4K, high-speed cameras follow the action, bringing iconic images, unseen perspectives, and revealing details to the screen. The flood plains of Prayagraj and the banks of the confluence of the Ganga, Yamuna, and mythical Saraswati rivers, form the stage upon which the drama unfolds. Scenes of festivity, processions, and thousands of ascetics charging into frigid waters for the holy baths of the Shahi Snaan, are some of the highlights. The changing seasons, myriad moods, vivid colours, and sheer scale, make for a compelling visual feast. The myriad challenges of managing crowds, providing security, and organising basics like food and accommodation, get their due place in the documentary. Viewers will get a sense of what it takes to pull off history’s biggest religious event. Candid moments and the spectrum of emotions — from anxiety and despair, to hope and joy — play out at the Khoya-Paya (Lost & Found) Centres, in a heart-warming sequence. Historical archive footage and graphical representations further enrich the factual storytelling. Naga Sadhus, wearing only ash and dreadlocks, akhaaras, pilgrims, foreign visitors, VVIPs, organisers, mounted-police, officials, cooks, volunteers each with a purpose or on a quest, present the many faces of the Kumbh. In this churning sea of humanity, the narrative zeroes into quiet moments, to tell intimate stories of individuals and what the Kumbh means to them. The varied cast of characters includes a Bollywood cinematographer, a member of the third-gender Kinnar Akhaara, a Sadhvi of American extraction, an artist, and the head of the control and command centre. Along with top-end production values, never-before-seen footage, research, and catchy stats, the film also benefits from the insights of an erudite panel of experts. The cultural historians and authors featured in the film, shine a light on the fascinating nuances, ideas and belief system that are at the heart of the Kumbh Mela — a shared human experience like no other.

HistoryTV18 aims to tell stories of India that engage, inform, and entertain.

‘Kumbh: Among the Seekers’ premiering on January 29th, 9 PM is the latest in a set of dramatic documentaries about India’s rich cultural history and the elemental human quest to find answers to life’s enduring mysteries.

Pilgrims, visitors, and curious seekers come to Kumbh looking for spirituality, spectacle, or salvation. They come from India and across the globe. The Ardh Kumbh of 2019, held at the Triveni Sangam at Prayagraj, was the largest religious congregation, ever. Its central message remains spiritual and its appeal universal. In ‘Kumbh: Among the Seekers,’ viewers will meet devotees from far away shores, seeking to transcend the material and connect with something intangible and meaningful. Some come to find themselves, some to escape, and some to renounce the material world. The thirteen Akhaaras or Hindu monastic orders are spotlighted, as they arrive in Prayagraj. The wandering mystics of India, the Naga Sadhus, are the rock-stars of the Kumbh Mela. The film captures the exalted status of those who have renounced the world. In time-honoured tradition, these Digambar or skyclad, who own nothing, are seen leading the faithful in the holy Shahi Snaan. Just as the waters of sacred rivers merge at the confluence, a multitude of ideas, influences, cultures, and languages mix in the great melting pot that is the Kumbh. Everyone is welcome here.

Taking viewers back to the weeks preceding the Mela, ‘Kumbh: Among the Seekers’ shines a light on the challenges and scale of operations. The event entailed building the largest temporary city in the world, spread over 32 km. As many as 130 Million pilgrims camped here. The Mela area had 300 KM of roads and 22 pontoon bridges built in record time. There were also thousands of make-shift kitchens serving daily bhandaras, CCTV cameras, wireless networks, supervised lost and found centres, 3,500 megaphones, and fifty-thousand security personnel. It was unprecedented in scale and cost over 4,000 Crores. The high-powered dignitaries visiting the Prayagraj Kumbh, included the President and the Prime Minister of India, whom we also see in the film.

Avinash Kaul, MD A+E Networks | TV18 and CEO Network18, says, “At HistoryTV18, we believe in telling stories that are engaging, visually spectacular, as well as relevant for our viewers. ‘Kumbh: Among the Seekers’ is not just a compelling story, it’s a celebration of a living wonder, quintessentially Indian yet universal in its appeal. The show does a fabulous job of chronicling a recurring event in our cultural history, which continues to grow and evolve.”

Watch ‘Kumbh: Among the Seekers’ on Wednesday, 29th January, 9 PM only on HistoryTV18.