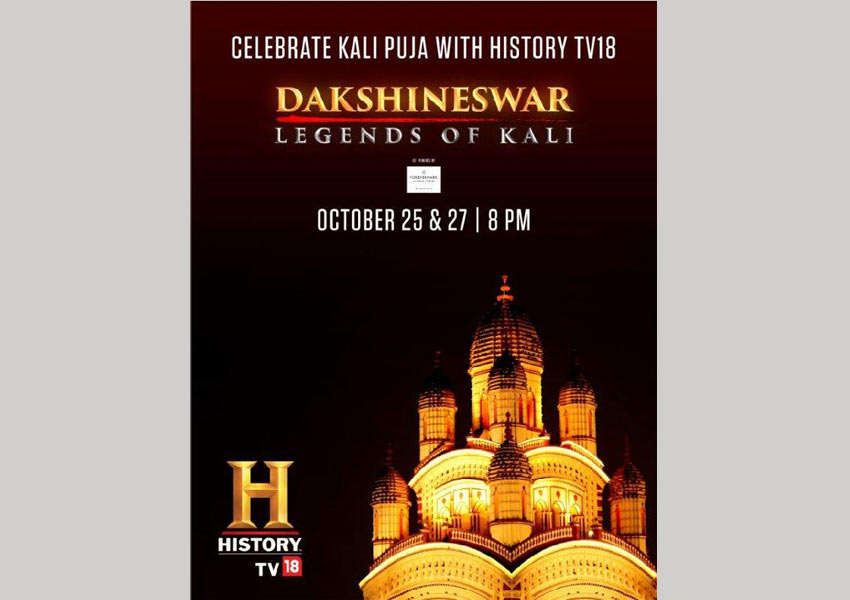 HistoryTV18 presents an hour-long documentary about the fearsome, mysterious yet benevolent Goddess Kali, Her devotees, festival and great temple. According to Hindu tradition, the warrior Goddess is the personification of Shakti, the feminine divine, at its most powerful. She is all-conquering and Her wrath all-consuming. But when She is calm, then like nature She is maternal – nurturing and protective.

When most of India shines in celebration of Diwali, it is Goddess Kali who holds centre-stage in Eastern India. Kali Puja is special in Kolkata, and of its many temples, none is grander than the Dakshineswar Kali Temple. Ever since it was completed and opened to the public in the mid-nineteenth century, it has been a melting pot of diverse ideologies.

Dakshineswar Kali Temple remains iconic, and millions still throng here. The narrative also encompasses the fascinating stories of prominent historical figures. Rani Rashmani, the temple’s visionary builder, is key to the story. So is Sri RamkrishnaParmhans, the temple’s head priest. Today, he is revered as a saint mystic, whose pluralist ideas were a life-changing influence for Swami Vivekananda. The film is rich in facts and provides insights into mythology, its powerful symbolism and present-day relevance, especially about the representation and position of women in Indian society.

Research, top-end production values and never-seen-before visuals, make the film a cut above the rest. Stylised animation and imagery recreate the legends and forms of Kali, from bloodthirsty demon-slayer and Goddess of Tantrics, to the beloved and divine mother of tens of millions of devotees. Indeed it is Kali’s devotees and their human stories that make the film moving and immersive. Devotees like Amruta, for whom Ma Kali makes up for the loss of her own mother. The inherent egalitarianism and inclusiveness of Goddess worship in Kolkata also finds expression in the film.

Viewers are introduced to Rajib-ul-Huq, a devotee of Kali, who sees no contradiction in revering the Hindu Goddess and being Muslim. The cosmopolitan character of West Bengal’s capital city shines through in scenes of Kolkata’s China Town. Here the centuries-old Chinese community have their own Kali Temple, where devotees receive prasad of momos and noodles. The story also takes the audience to mysterious Tarapith, an important centre of Kali worship, to see Gauri, a woman tantric in the little-understood world of Tantra.

In keeping with the enigma that is Goddess Kali, the festival of Kali Puja is also a joyous fusion of tradition, modernity and inclusiveness. ‘Dakshineswar: Legends of Kali’ features Kolkata-based music band, Project Maya. The band creates a soundtrack for the occasion, to strike a chord with Kali’s new generation of devotees, giving traditional ShyamaSangeet a millennial makeover.

With ‘Dakshineswar: Legends of Kali, HistoryTV18 creates a definitive one-hour that shines a light on the mythology and mystique of the fearsome Kali. The clutter-breaking film, available in English, Hindi, Tamil and Telugu, aims to interpret and showcase the abiding faith in the ancient tradition of Shakti, in 21st Century India. In doing so, the film delves into surrounding themes of feminism, egalitarianism, inclusiveness and pluralism, as well as issues of identity and belief that bridge the gap between social and economic class, caste, religion, and gender. With genre-defining storytelling, exciting characters and expert opinion, this isn’t just a film about a Goddess and Her magnificent temple. It is the telling of the story of the cycle of creation and destruction, faith, symbolism and cultural truths.

Avinash Kaul, MD A+E Networks | TV18 and CEO Network18 says, “At HistoryTV18, we believe in telling stories that are engaging as well as relevant for our viewers. In keeping with our commitment of raising the bar with each original production, ‘Dakshineswar: Legends of Kali’ is an absolutely compelling story, told exceedingly well.”