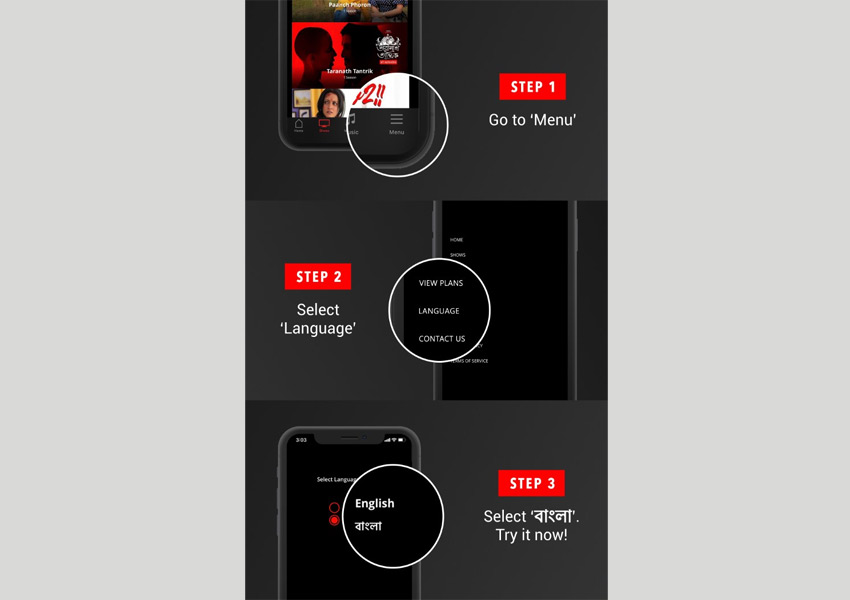 hoichoi have introduced a Bengali user interface along with their existing English one as an initiative to be hyper-local with its Bengali audience segment across India and Bangladesh and for the Bengali Diaspora. Navigation Options, Menu Options, Content Titles, Metadata and Search will all be in Bengali if one wishes to switch to that option (available on both App and Website). This also includes having the option to display different images for Content Titles for the English and Bengali User Interface.

Vishnu Mohta, Co-Founder of hoichoi, stated: “hoichoi has already acquired a huge base of active Bengali users around the World, hence, localisation of the app and website had become a priority for us. After all, the content we provide is in Bengali language thus the ‘look & feel’ of the platform should also signify that. Our purpose is to be the sole entertainment destination for the global Bengali.”

Some other initiatives announced by hoichoi and have been implemented are: To add another 100+ hours of Original Content in 2019, of which already Hello S2, Dhanbad Blues, Holy Faak 2, Charitraheen, Taranath Tantrik, Bou Keno Psycho, Paanch Phoron, Chupkotha 2, Byomkesh S4, MisMatch 2 and others are already live along with the release of its first Bangladesh Original Series titled Dhaka Metro in April followed by Money Honey on the auspicious occasion of Eid. hoichoi has also successfully launched in Bangladesh with local payments and have added Android TV and Roku to its repertoire of existing devices.