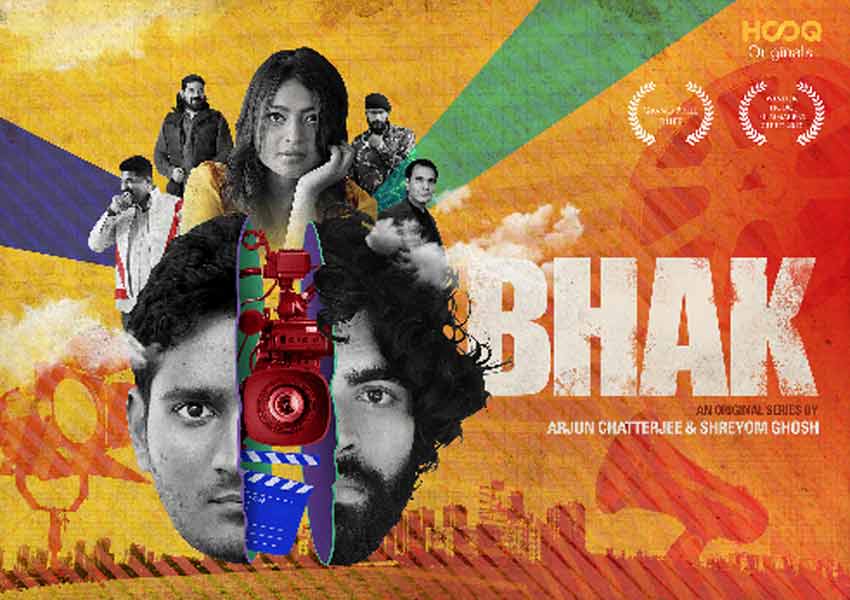 HOOQ announced the launch of Bhak, the winner of the inaugural HOOQ Filmmakers Guild initiative and a first-of-a-kind HOOQ Original series. The pilot episode of Bhakis available to watch on HOOQ across the region now, with the highly anticipated second episode to launch on 25th April, and consecutive episodes premiering every Thursday.

The dramedy follows the story of Rahul and Faizal, two ambitious young filmmakers who, after suffering a string of rejections and having been pushed around by Bollywood one-too-many times, attempt to take matters into their own hands. A task easier said than done as the maze that is Bollywood proves nearly impossible to navigate. It also follows the journey of Shalini, who in contrast to the boys, deals with working on a big budget Bollywood set and encounters the dirtiness beneath the glamour. Bhakis a vicious, yet hilarious roller-coaster ride of perseverance, passion, betrayal, and the incredible love for Indian cinema.

Commenting on Bhak’s win, Jennifer Batty, Chief Content Office, HOOQ said, “Today audiences across Southeast Asia and beyond are experiencing a more diverse range of content than ever before. Whether local, regional or international, consumers are being exposed to resounding and relatable stories that challenge conventions. It was on this premise that the HOOQ Filmmakers Guild was launched, with an aim of providing aspiring talent across Southeast Asian the opportunity to showcase their creative concepts and bring their stories to life for all to experience. That’s why we are delighted with the success of the HOOQ Filmmakers Guild initiative, and the winner of the first competition, Bhak. We are certain that it will resonate with audiences in India and across the region.”

As well as providing the winners with the opportunity to showcase their content, HOOQ has also worked with the Bhakproduction team, to offer mentorship, guidance and support, to help bring their vision for the series to life.

Commenting on launch of Bhak, Zulfiqar Khan, Managing Director, India – HOOQ, “The Indian audience today have evolved and enjoy real life relatable content. They are always in pursuit for content which is gripping and keep them engaged; be it international content encompassing films, digital series or documentaries. Against this background, HOOQ Filmmakers Guild was launched with an aim to provide budding talent across South East Asian countries an opportunity to showcase their creative concepts. We are delighted with the success of the HOOQ Filmmakers Guild, which has been well received from those in the industry as well as from consumers. We are proud to announce the premier of Bhak directed by Arjun &Shreyom on HOOQ India and are confident the series will resonate with Indian audiences.”

Arjun Chatterjee, Co-Director of Bhak said, “In such a talented and competitive industry, it is very rare for young, aspiring filmmakers to get an opportunity to showcase their talent. We are thankful to HOOQ for giving us this opportunity and allowing us to share our creative vision with such a broad audience base – from India to Indonesia, Singapore to the Philippines.”

Shreyom Ghosh Co-Director of Bhak, added, “We based Bhak on real-life moments that we experienced on our own journey; one that can only be described as a roller-coaster ride, filled with lots of rejection, personal struggles and disappointment, as well as incredible moments of hope, opportunity and success! With Bhak, we really put our hearts on the canvas, and hope viewers enjoy watching it as much as we enjoyed making it.”

The second episode of Bhak premieres exclusively on HOOQ from April 25, with consecutive episodes launching every Thursday.