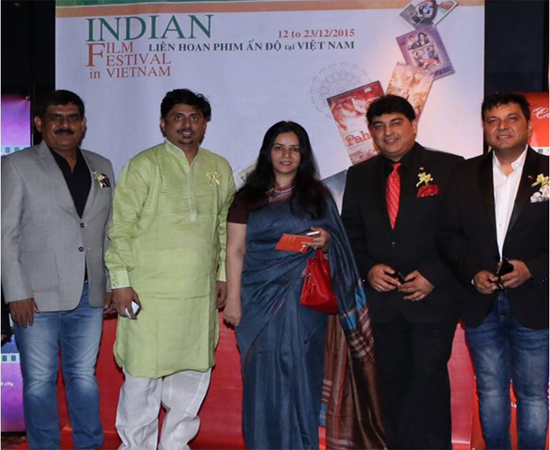 The 12 day long Indian film festival Vietnam that opened to a full house in Da Nang and travelled to Ha Noi, concluded in a grand style in Ho Chi Minh City on December 23, 2015.

Speaking at the closing ceremony, Consul General of India Ms Smita Pant said, “The idea of having the Festival concluded at the helipad of Bitexco Tower ( 54th floor) was to showcase the beauty and dynamism of Ho Chi Minh City at one go.” She also said that, “HCM City and other exotic places in Vietnam could be considered by the Indian film makers to shoot films.”

Ms. Pant further stated that  Indians had become major travellers and spenders and as per the World Tourism Organisation by 2020, 50 million Indians would travel abroad.The tourism boards all over the world had been engaging the Indian film makers by offering subsidies and ground support with a view to promoting  tourism in their countries. With increasing number of cinema goers in India and also increasing popularity  of Indian cinema abroad, a film made in Vietnam  could provide huge canvass to showcase Vietnam culture and beauty and also  attract Indian tourism. However, for this ground  support, subsides and timely approval would be crucial.

The Indian delegation in the 12 day long  Indian Film Festival at the invitation of Vietnam National Administration   of Tourism  under the Vietnam ministry of culture,  sports and tourism had travelled to Ha Noi, Ninh Binh, Ha Long Bay , Cu Chi tunnels and Ho Chi Minh City for exploring film making sites in Vietnam, possibility  of co- production and also discuss ground support from the government for film making in Vietnam. Round table conferences in Ha Noi and Ho Chi Minh City between the Indian and Vietnamese sides were held to discuss cooperation on above subjects.

Mr. R C Dalal – the co-curator of IFFW said, “There is tremendous scope for filming at the beautiful locations in Vietnam. All the Indian Film makers praised the warm hospitality and cultural diversity of Vietnam and also informed that they were looking at the possibility of having Vietnamese artists enter Bollywood films.”

“The Indian delegation of film makers has expressed interest to come and shoot films in Vietnam in near future.” said Captain Rahul Bali, the co-curator of IFFW  proposing a Vietnam focused film festival to be  held in India to promote tourism, cultural cooperation and people to people links.

During the festival, 8 Indian movies including 3 Idiots, Bhaag Milkha Bhaag, Paheli, Taare Zameen Par, Dil Chahta Hai, Wake Up Sid, Oh My God, Jodhaa Akbar were screened at Da Nang, Ha Noi and Ho Chi Minh City. Vietnamese audience said they could relate to the stories of the movies. In view of the tremendous response received, Consulate General of India is planning to  organise screening of these movies again on non commercial basis in near future.

The film festival was organized in cooperation with the Ministry of Culture, Sports and Tourism of Vietnam, The Directorate of Film Festivals, Ministry of Information and Broadcasting, Government of India and IFFW.

Tags:
Previous Article
Bonita India Recognized as One of India’s Most Promising Startups
Next Article
Max Bupa invites India to Walk for Health