Into the Wild with Bear Grylls and Ajay Devgn 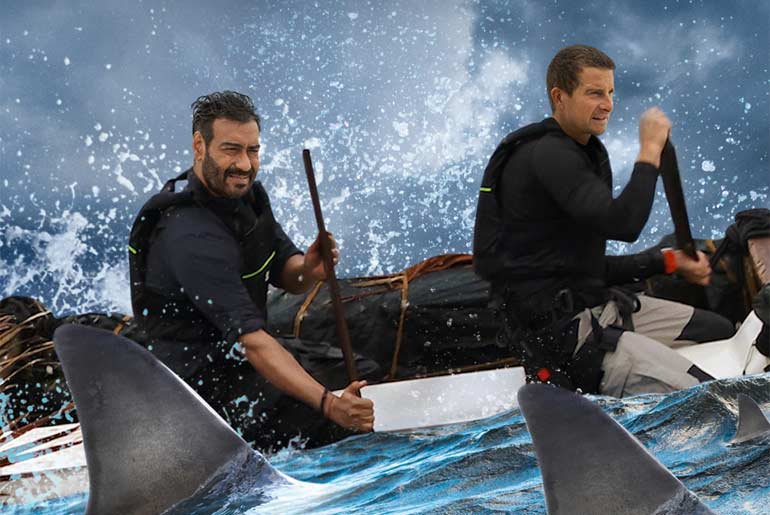 Discovery India created history yet again, this time with the premiere of Into the Wild with Bear Grylls and Bollywood’s Superstar Ajay Devgn. The premiere on Discovery was proclaimed as the highest-rated show in the infotainment genre in the Year 2021 with 605k AMAs. (Average minutes audiences; 2+ India). Across the network, ITW premiere with Ajay accumulated an impressive 13.6mn unique reach. Within its first week premiere on discovery+, the show opened to rave reviews from the audience witnessing a strong momentum in subscription because of its gripping content and also with its truly out-of-the-box and disruptive marketing innovations.

The journey started with a special edition of Man Vs Wild with Bear Grylls & PM Modi which was billed as the TV event of the year. Followed by Into The Wild with Superstars Rajinikanth and Akshay Kumar, generating record TV ratings and viewership for the cult new franchise. The latest episode of Into The Wild with Bear Grylls and Ajay Devgn has continued the legacy for being the most-watched show in the genre this year too. (2+ India)

Here are the rating highlights of the original airing at 8:00 pm on October 25 on Discovery Channel.

·         Unprecedented leadership: Discovery channel alone rated higher than all infotainment channels put together with a 55% channel share amongst the Infotainment Genre.

The campaign was driven by multiple touchpoints across platforms that immerse you in the wild side of the islands through its well-thought campaign– Yeh Koi Khel Nahi Hai Bro! Discovery created an AR Instagram filter that transported you to the wild jungles in the remote islands of the Indian Ocean. The campaign used its virtual environment to gain real engagement through its digital game and interactive banner ads. In no time after the launch of the trailer, social media was flooded with humorous memes pertaining to Ajay Devgn and Bear Grylls that helped in building familiarity with the show. From legendary cricketers to comedians, influential personalities like Yuzvendra Chahal, Virendra Sehwag, Aakash Gupta and Taran Adarsh amongst others were tapped to generate buzz on social media, while creating awareness around Ajay Devgn’s episode. This led to instant engagement while letting users draw a powerful connection with the show and its theme. The on-ground installations at Juhu Beach and Bandra Band Stand along with first of innovation lead outdoor campaigns have disrupted the media space with its unique strategy.

The episode made waves on the front of social impressions, clocking a whopping 371 million impressions, making it one of the most talked-about shows worldwide. The buzz was amplified with influencer videos from iconic cricketers like Virender Sehwag and Yuzvendra Chahal and ace comedians like Johnny Lever and Akash Gupta. The “into the wild” alumnus Akshay Kumar also joined the conversation with friendly banter with Ajay and Bear on Instagram.

Into the Wild with Bear Grylls is an innovative format inspired by Man vs Wild, one of the most-watched wilderness survival television series globally. The first episode of the series featured Superstar Rajinikanth, followed by the action hero Akshay Kumar and then the Bollywood Supercop Ajay Devgn, making this cult franchise a household name. ‘Man vs Wild with Bear Grylls & PM Modi’  disrupted the Indian media landscape, establishing itself as the TV event of the year. Beyond Prime Minister Narendra Modi, Bear Grylls has also hosted prominent celebrities in the past such as then sitting American President Barack Obama, Kate Winslet, Roger Federer, Julia Roberts and many more. Into The Wild with Bear Grylls is produced for Discovery Communications India by The Natural Studios and Banijay Asia.