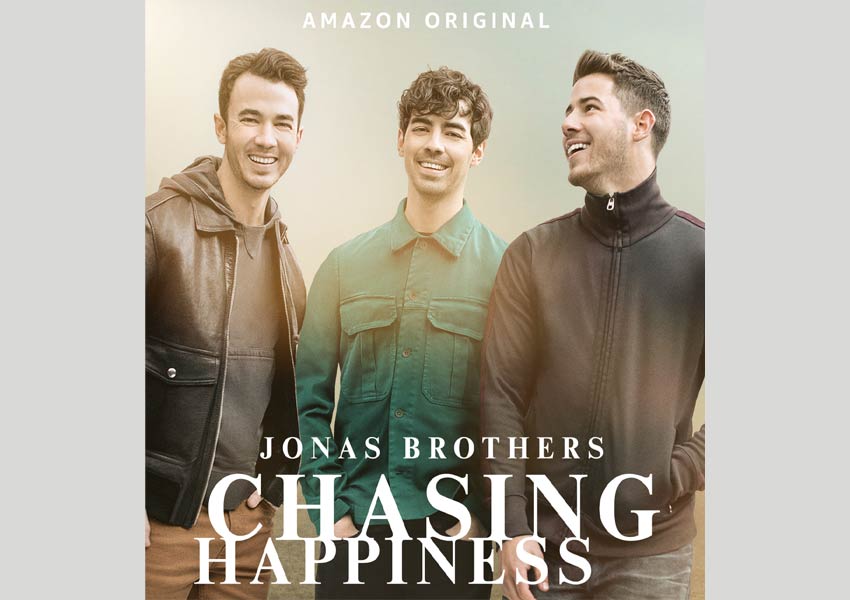 Filled with never-before-seen footage of the brothers’ early days, Chasing Happiness is a moving, personal look at the Jonas Brothers’ journey from a family struggling to make ends meet, to pop superstardom, to an abrupt hiatus that shocked the world. As Nick, Joe, and Kevin separate and try to find their footing as individuals, Chasing Happiness goes beyond the headlines and behind the scenes, as they build their own successful lives and careers outside of the band, and ultimately rebuild their relationships as siblings and rekindle a musical spark that inspires their upcoming album, “Happiness Begins.”

The preeminent male group of this century, Jonas Brothers opened the floodgates for a new era of titans in pop music. They earned two number one albums and sold out shows throughout three continents. Selling over 17 million-plus albums with over 1 billion streams worldwide, they’ve achieved dozens of platinum and gold certifications. Jonas Brothers notably received a GRAMMY® Award nomination in the category of “Best New Artist,” garnered “Breakthrough Artist” at the American Music Awards, won Billboard’s “Eventful Fans’” Choice Award for “Best Concert Tour of the Year,” and took home a Mexican Grammy, showcasing their international influence. The tremendous success of the band provided a launch pad for the successful and storied solo careers of Nick Jonas, Joe Jonas, and Kevin Jonas, who have kept loyal fans yearning for a reunion, until now.

Known as the biggest comeback of the year, Jonas Brothers announced their reunion with their RIAA-certified platinum hit single “Sucker,” which now exceeds 445 million global streams to date. During release week, it clinched #1 on major streaming services, and became one of the top streamed songs on Amazon Music Unlimited, and one of the most requested debut songs on Amazon Music with Alexa in its first week. Speaking of making history, the rollout of “Sucker” marked “the first time a band debuted at #1 on the Billboard Hot 100 chart this century.” Continuing the runaway success, “Cool” has notched 70 million global streams and soared to #1 on iTunes Overall Top Songs Chart and Top Music Videos Chart.

Most recently, the band revealed news that fans everywhere have waited nearly a decade for. The group will release its first album since 2009 and one of 2019’s most anticipated records, Happiness Begins, on June 7 via Republic Records.

After building overwhelming anticipation they also announced the details for their 40-city Happiness Begins Tour this summer and fall with special guests Bebe Rexha and Jordan McGraw. Following the incredible response, yesterday they announced second shows in Chicago, New York City and Toronto due to overwhelming fan demand.