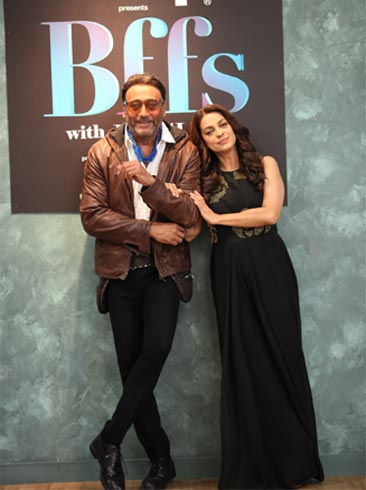 In the upcoming episode of BFFs with Vogue on COLORS INFINITY, Jackie Shroff made our hearts go awww. From not just being a true BFF for Juhi while he ate chilies instead of her in the ‘Scary Spice’ segment, he also proved that no matter what, his baby boy, Tiger comes first for him. When asked by Neha Dhupia, “who is the better actor – Tiger or Disha?” Jackie without a second thought named Tiger and further added, “Disha, no offence to you but I haven’t seen it (your films).”

It will be interesting to see if Jackie will finally watch Disha’s acting skills in the upcoming film ‘Baaghi – 2’ and change his opinion on the better actor between the lovely young couple. It is often seen when a (rumored) couple is paired together in a film, one of them steals the spotlight, be it the case of Ranveer Singh-Deepika Padukone or even Aishwarya Rai-Abhishek Bachchan. In their upcoming film, who will steal the thunder this time around between Tiger Shroff and Disha Patani.

Aditya Chopra & Rani Mukherjee Were Meant To Be? Find out on BFFs with Vogue
MediaInfoline Feb 16

Aditya Chopra & Rani Mukherjee Were Meant To Be? Find out on BFFs with Vogue