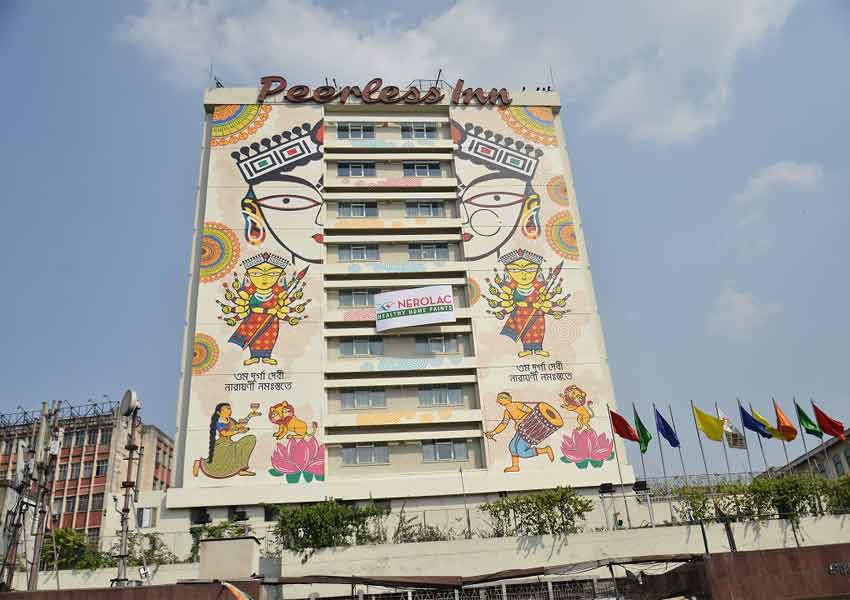 Kansai Nerolac has effectively engaged with its customers through the product portfolio and customer awareness campaigns promoting transformation and environmental sensitivity over the years. The Durga Maa mural signifies the same vision of transformation and beautifying Kolkata in its fourth consecutive year celebration of Nerolac Shera Para Shera Pujo.

The magnificent portraiture, conceptualized by FCB Ulka and brought to life by artist Tushar Kamble, is inspired by the rich tradition of Bengal and local folklore, currently adorns the walls at Peerless Inn, Taltala. Depicting the homecoming of Maa Durga, the elements used in the visual identity illustrate the grand celebrations that happen during pujo, when men and women rhythmically dance to the beats of the dhak along with traditional dhanuchi dance competitions. The mural also demonstrates the lions – vahan (vehicle) of Maa Durga. Flaunting the traditional Bengali flavour, the art is a splendid amalgamation of the pujo festivities and the power that Maa Durga epitomizes.

Speaking on the unveiling, Mr Ram Mehrotra, VP – Sales & Marketing India & Nepal for Kansai Nerolac Paints Ltd , said, “Bengal has always been an important market for us. Inspired by the cultural spirit and essence of the state, we have undertaken several activities to engage with our customers. In the past, we have launched ‘Shades of Bengal’ – a coffee table book that unravels various shades and spirituality of Bengal. The Durga Maa mural is yet another attempt to connect with our Bengali audience by adding colour and happiness to their lives on an auspicious occasion like this. The idea behind painting the mural at Peerless Inn was, if put simply, to make Durga Maa stay back, even after Durga Pujo concludes – a commemoration from Nerolac as giving joy back to the city of joy.”

He added, “Nerolac, along with extensive support from paint trade dealers over the years, has continued to flourish. As a part of this year’s initiative, we also organized a community-building initiative called ‘Paintdaan’, wherein Nerolac dealers across West Bengal donated minimum one litre of paint towards the marvellous mural.”

Supporting the initiative, Bengali actor, Rituparna Sengupta, said, “I feel immensely proud to be a part of this magnificent unveiling! It is overwhelming to see such creative spells and love of the people of Bengal for Maa Durga, during this time. Shera Para Shera Pujo is indeed a distinguished initiative and Nerolac has been doing a great job of bringing local communities together, thus enhancing community building.”

Commenting on the initiative, Tapas De, General Manager at Hotel Peerless Inn, the event partner, said, “We are honoured to partner with Kansai Nerolac for this unique initiative. Durga Puja is the biggest socio-cultural festival in Kolkata and Kansai Nerolac has provided, a remarkable opportunity to host Durga Maa at our hotel. The mural showcases the true meaning of Durga Pujo.”

Shera Para Shera Pujo 2018 witnessed an overwhelming response with over 300 registrations across Kolkata and beyond making it the biggest Mural and Pujo competition in the state. This year too, both competitions are running simultaneously, in association with Red FM, one of the leading radio stations in Kolkata. Consumers can vote for their favourite Pujo at here. Winners for both competitions will be announced on the website and cash prizes would be given out to top three murals as judged via public voting & Red FM RJs.