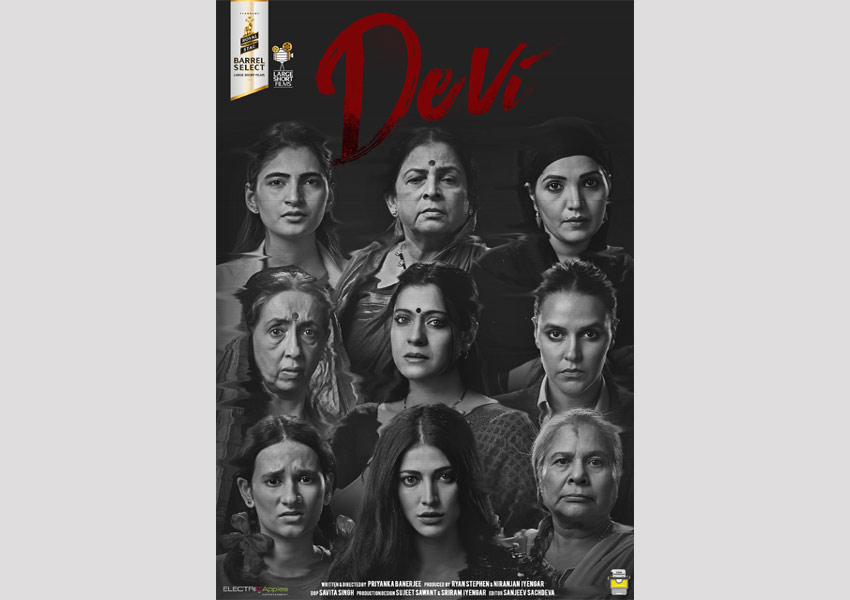 Royal Stag Barrel Select Large Short Films premiered their most anticipated short film of the year – ‘Devi’. The movie which has intrigued the audiences because of its impactful storyline & star-cast, outlines the story of 9 oppressed women navigating through an unusual sisterhood thrust upon them by circumstance. The 11 minute movie stars multiple acting powerhouses such as Kajol, Shruti Haasan, Neha Dhupia, Neena Kulkarni, Mukta Barve, Sandhya Mhatre, Rama Joshi, Shivani Raghuvanshi and Yashaswini Dayama in prominent roles. Produced by Electric Apples Entertainment led by Niranjan Iyengar and Ryan Stephen the movie is written & directed by Priyanka Banerjee.

The story of Devi narrates the tale of nine oppressed women, from different strata of the society, living in a small room, held together by similar fates and stories. A doorbell brings the news of yet another new entrant about to overcrowd their sanctuary. The 9 women in the room debate about their stories of tragedy & pain and why they deserve to stay in the room over the stranger.

Commenting on the film, Writer & Director Priyanka Banerjee said, “There are many issues women are facing in India such as honor killing, female feticide, rape, molestation etc. Devi, an 11 minute short film brings women from different walks of life affected by these issues and puts them in a circumstance where they and we, have no choice but to engage with their tragedy and pain. I am grateful that I got a chance to work with this stellar star cast who delivers the agony of their character with such finesse & perfection on the screen. I would like to thank Niranjan, Stephen & Royal Stag Barrel Select Large Short films for believing in me and allowing me to showcase Devi at a platform that aims to drive change in the society.”

Niranjan Iyengar commented, “Devi is an important film for Electric Apples. It was Ryan’s idea to cast this ensemble and we were really glad that all the actors saw what we did in the film. It wouldn’t have been possible to make this film without the support of Royal Stag Barrel Select Large Short Films and all the Devis associated with it! We are grateful to every single technician who has worked on Devi to make it as powerful as it is!”

Ryan Stephen added, “When Priyanka Banerjee first sent Devi to me, I read it and immediately called Niranjan, and told him we MUST make this film, and we should cast our friends Kajol, Shruti, Neena Kulkarni, Neha Dhupia and Mukta Barve. Devi is a poignant and important narrative that had to be shared with the world. And that could only be achieved with the voices of these strong women. As much as Electric Apples Entertainment’s agenda is to give a platform to newcomers, be it actors or technicians, the truth is Devi would not have garnered this kind of attention had we cast newcomers. We are happy to showcase our movie on Royal Stag Barrel Select Large Short films platform which in very short span of time has become synonyms to powerful short films.”

The trailer of the movie which was released on 24th February 2020 on Youtube channel of Royal Stag Barrel Select Large Short films and has garnered 1Million views in just two days.