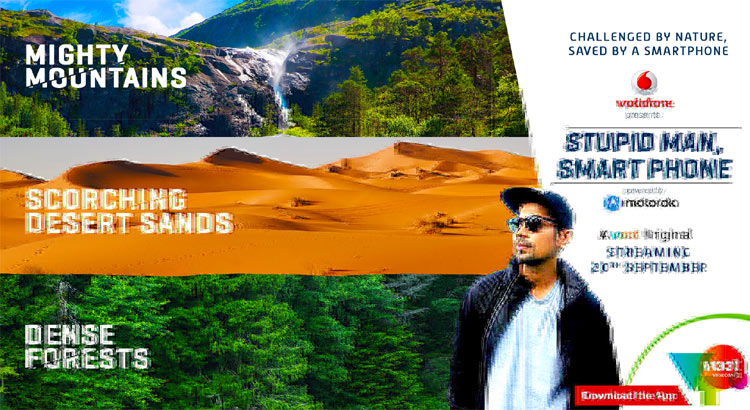 Scaling a treacherous mountain pass, battling wildlife & river rapids in the forests and beating the gruelling desert sun – Can you survive and stay alive in these harsh, uninhabited terrains with the help of just a Smartphone and a data strong network? Viacom 18’s Video-on-Demand streaming service VOOT is all set to answer this question with the launch of India’s first ever Digital Survival Series and its newest Voot Original –  Vodafone presents “Stupid Man Smart Phone” powered by Motorola.

Produced by BBC Worldwide Productions and hosted by acclaimed actor and India’s biggest digital superstar Sumeet Vyas, Vodafone presents ‘Stupid Man Smart Phone’ will introduce audiences to a never seen before format in the history of Indian entertainment where a SMART PHO`NE and a super network is the ONLY means of survival.  This unique and engaging show is all set to premiere exclusively on 20th September on India’s leading Video on Demand Destination – VOOT.

Speaking about the new show Gaurav Gandhi, COO – Viacom18 Digital Ventures said “VOOT continues to take the leadership mantle on innovation with many pioneering initiatives across both content and technology. The latest VOOT Original “Stupid Man Smart Phone”, a category first, is one such initiative, that will offer a completely differentiated and engaging experience to our audience”

Elaborating on the launch of the show, Monika Shergill, Head of Content, VOOT said “At VOOT, we have always strived to deliver differentiated content and with ‘Stupid Man Smart Phone’ we are once again breaking new ground. For the first time, an internationally recognised non-scripted format of this scale is being produced as a streaming Original series and we at VOOT are proud to be the ones creating it. The show is unique with today’s Social Media madness at the heart of it. It’s the only show where followers of Sumeet & his partners participate and aid in their survival choices. This unique concept with its social engagement potential, grandeur and edgy humour is sure to provide an immersive entertainment experience to all our viewers.”

A winner of the ‘Best Multi-Platform Format’ at the 2017 International Format Awards in Cannes earlier, this Indian adaptation of the BBC Worldwide format features Sumeet Vyas and a celebrity guest travelling across 3 unforgiving terrains, trying to complete the mission at hand while being aided by their smartphones and their legions of Social Media followers.

Speaking about the show and its unique format Myleeta Aga, SVP and GM South East Asia and South Asia at BBC Worldwide said “We are delighted that India is the first country in Asia that will air the Indian version of this BBC format and are equally pleased that we will be producing it for our long-standing partners at Viacom. We look forward to partnering with Voot to make this show successful in India.”

Speaking about partnering with VOOT for Stupid Man Smart Phone Siddharth Banerjee, EVP Marketing at Vodafone said, “Vodafone is happy to partner with content that is new age and digital. Vodafone presents ‘Stupid Man, Smart Phone’ is a show with connectivity at the heart of the storytelling. The format enables the protagonists to #MakeMostOfNow with the Vodafone Data Strong Network™ and navigate challenges as they traverse diverse geographies across India in this unique VOOT show.”

Speaking about the association Rachna Lather, Head of Marketing, Motorola, India said, “We at Motorola are thrilled to be a part of this first of its kind video series format in India. The Moto Z series do a lot more than just connecting you to people. The Moto Z2 Play along with the Moto Mods are everything you need to survive. And you can – not just survive but thrive, in any terrain with the Moto Z2 Play, a revolutionary smartphone which seamlessly transforms into a battery powerhouse, a 70′ theatre or a boombox with Moto Mods. The viewers will see how much fun Sumeet and his friends have using the Moto Z2 play with Moto mods while performing the tough challenges”.

Along with their inimitable personality, each celebrity guest also brings to the show their extensive social media fan base which coupled with Sumeet Vyas’s massive internet following makes for relevant and often crucial interactions through all the episodes.

In the lush rainforests of South India, Sumeet Vyas teams up with the vibrant Evelyn Sharma while the harsh Rajasthan desert sun beats down upon YouTube funny man Sahil Khattar and TV hearthrob Karan Kundra keeps Sumeet company in the untouched mountains of Arunachal Pradesh.  To survive, all three of them are armed only with a smart phone, a data strong network and a constant supply of irreverent humour!

This all New VOOT Original series – Vodafone Presents Stupid Man Smart Phone Powered by Motorola – is all set to go live on VOOT on 20th September 2017.

This latest VOOT Original comes on the back of several successul hits from VOOT over the last 15 months including  – ‘It’s Not That Simple’, ‘Shaadi Boys’, ‘Untag’ and  the recently released ‘Yo Ke Hua Bro’.