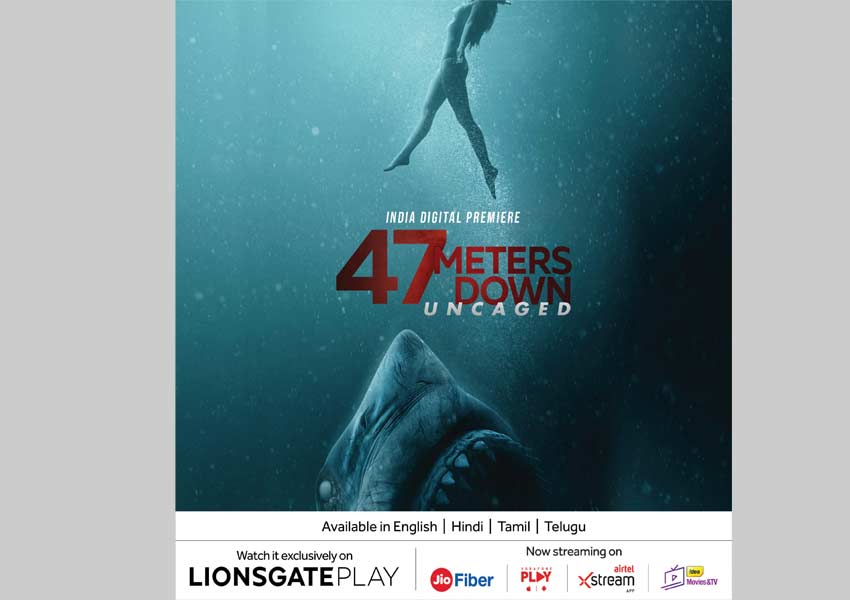 47 Meters Down: Uncaged is a 2019 American-British survival horror film directed by Johannes Roberts and written by Roberts and Ernest Riera and a sequel to the 2017 hit 47 Meters Down. The plot follows a group of teenage girls who scuba dive to a ruined underwater city, quickly learn they have entered the territory of the deadliest shark species in the claustrophobic labyrinth of submerged caves. The film will be available in English, Hindi, Tamil and Telegu on partner platforms of Lionsgate Play – Vodafone Play, Airtel Xstream, Idea Movies&TV on Friday,3rd July 2020.

Shot against the beautiful landscape of South America,47 Meters Down: Uncaged, starring Sophie Nélisse, Corinne Foxx, Brianne Tju and Sistine Stallone is about the diving adventure of four teenage girlsexploring a submerged Mayan City. Once inside, their rush of excitement turns into a jolt of terror as they discover the sunken ruins are a hunting ground for deadly great White Sharks. With their air supply steadily dwindling, the friends must navigate the underwater labyrinth of claustrophobic caves and eerie tunnels in search of a way out of their watery hell.The film received rave reviews for it’s cinematography and critically shot underwater scenes. Viewers will start longing for a holiday while watching this film.

The lead characters in the movie have adventure on their mind but little do they know that a trip that’s​ got them excited could very well be a terrifying trap. ​Watch this film to know how well-prepared they are for the dangers under the sea!