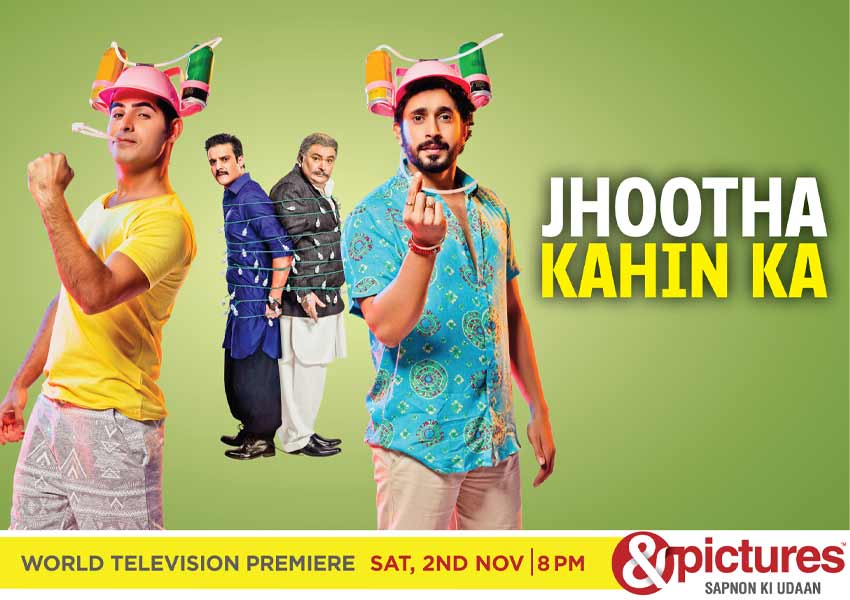 Have you ever imagined yourself in a situation where you get entangled in your own web of lies? Showcasing a fun take on this concept is Director Smeep Kang’s rib-tickling comedy Jhootha Kahin Ka. An ode to the 90s style of comedy, the movie traces the lives of two boys who get themselves dwindling between a series of lies that turns into a crazy roller coaster ride for them. The movie stars Sunny Singh, Omkar Kapoor, Jimmy Sheirgill, Lillete Dubey and Manoj Joshi in pivotal roles. This movie also marks the comeback of the veteran actor Rishi Kapoor on the silver screen. &pictures – Naye India Ka Blockbuster will air the World Television Premiere of ‘Jhootha Kahin Ka’ under the property Saturday Premiere Nights on 2nd November at 8pm.

Omkar Kapoor who plays the character of Varun in the movie said, “I have enjoyed working on Jhootha Kahin Ka and I am extremely honoured to be sharing screen space with Rishi sir, Manoj sir and Lillete ma’am. I have learnt a lot from them by just observing their work on set. It has been a fun roller coaster ride for me.. The treatment of the movie is very different from what we see nowadays. It is a plain and simple comedy that intends to play around situations and elicit laughter. With &pictures airing the World Television Premiere of Jhootha Kahin Ka, I hope the audience who missed watching it in theatres will be able to watch it on the small screen.”

The plot follows the life of Varun (Omkar Kapoor) who returns to India after completing his studies in Mauritius. While his father Yograj Singh (Rishi Kapoor) wants Varun to join the family business, Varun, on the other hand has other plans for his future. He returns to Mauritius to join his college friend Karan (Sunny Singh) so they can job hunt together. Once in Mauritius, Varun meets Riya Mehta (Nimisha Mehta) and falls in love with her. He lies to her family about being an orphan and moves in with Riya and her parents (Manoj Joshi and Lilette Dubey) as a ghar jamai. Karan too is in a fix when his long-time girlfriend Sonam (Rucha Vaidya) starts pressuring him to get married. Karan informs her that he is waiting for his older brother Tommy (Jimmy Sheirgill) who lives in London to give their alliance his blessings. However, it is soon revealed that Tommy is not in London but lodged in a jail. Varun and Karan get stuck in their web of lies when Yograj decides to settle down in Mauritius to be close to his son.

Will Varun and Karan be able to find their way out from their own web of lies?

To find out, watch the World Television Premiere of ‘Jhootha Kahin Ka’ on Saturday, 2nd November at 8PM only on &pictures