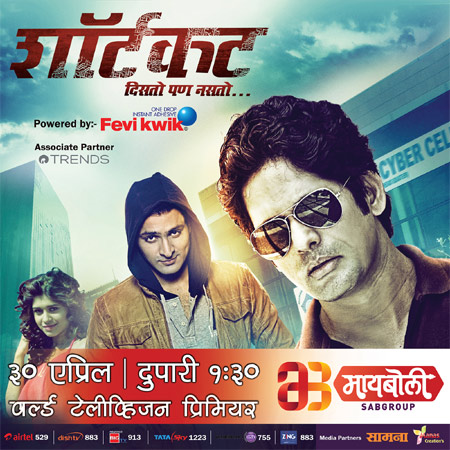 SABGROUP’s Marathi channel Maiboli is set to entertain the audience with the broadcast of the Marathi Blockbuster ‘Shortcut –Disto pan Nasto’a movie featuring for the first time on the small screen. The telecast is scheduled on 30th April,2017 at 1:30pm& repeat at 7:30pm,featuring stars like Vaibbhav Tatwaddi, Sanskruti Balgude& Rajesh Shringarpure.

‘Shortcut – Disto pan Nasto’, a blockbuster Marathi thriller directed by Harsh Raut is based on the ups and downs in Rohit’s life who plays the protagonist (Vaibbhav Shringarpure). A movie that went on to receive many industry accolades.

To add to the excitement, Maiboli will be running a “Shortcut to Win” contest, where viewers can win big with the prizes such as home theater speaker systems, LED TV & Bluetooth Headphones by simply answering couple of questions asked during the movie.

Magnifying this World television premier, an extensive marketing campaign has been unfolded across Maharashtra including TV, Digital, Outdoor, Print& PR campaigns.Brand like FeviKwik and Reliance trends are on board with this special screening as the powered by sponsor & associate sponsor respectively. Also on board are media partners – Dainik Saamna and Manas creations

Speaking about the World Television Premier, Vaibhav Tatwadi (Actor) said, “I am so excited that Maiboli is doing a world television premier of one my special films – Shortcut. This film is very close to me because the character I have played has never been portrayed in Marathi films before.”

Speaking about her Role, Sanskruti Balgude said, “Shortcut is a thriller movie that will keep you asking for more, my character is very glamorous and with the “shortcut to win” contest it is just going to add to the excitement.”