MX Player Urges You to ‘Express Yourself’ 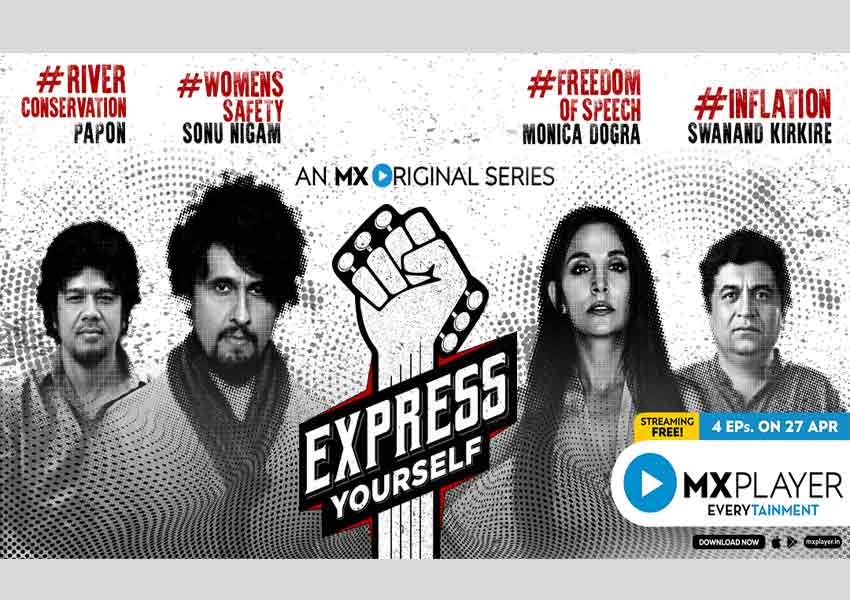 Honest and uncompromisingly direct – MX Original Series “Express Yourself” harnesses the power of music as a form of expression, to bring alive the various issues that matter to voters today. India’s leading musical talent will raise their voice to encourage positive change in the society by making meaningful songs about the social causes they truly believe in. The first 4 episodes feature hard hitting subjects sung by the melodious Sonu Nigam – whose episode is based on women safety, the vivacious Monica Dogra who tackles freedom of speech, river conservation that is highlighted by the sensational Papon while music maestro Swanand Kirkire explores the widespread problem of inflation.

Each episode takes the viewer through a journeyriddled with facts and statistics that will leave you horrified, visuals that leave a lasting impression and heart wrenching testimonials that come together in a song that will touch your soul. It showcases the inspiration behind the song’s idea, highlights a particular social problem that took root in the hearts of the musician and how they finally perform the song as an ode to people who have been victims, change makers or are related to the cause.The short format series sets the wheel in motion and both sensitizes as well as compels you to think about these widely spoken problems.

Commenting about his association with the series, Sonu Nigam said – “I think this is an episode that will tug at the heartstrings of viewers. Women safety is a topic of debate across the country and needs to be addressed at every level, starting from the way we bring up our boys to bringing about laws that help to curb this menace.”

Monica Dogra added further saying, “Freedom of expression, for me, is a birth right. And when birth rights get challenged, that is a very big problem. Because then we are obstructing something that we are meant to do as species on this planet”.

Committed to his cause, Papon said, “River conservation is the need of the hour. Whether it means appealing to the government that comes to power or doing your own bit to bring about change – our natural resources need to be helped if we want to continue living on this planet.”

Swanand Kirkire concluded saying, “Inflation is a reality that the citizens of this country livewith, year on year. This is a burden that has been plaguing many and needs to be addressed before it buries us alive.”

Emotions, aspirations and art will make for a show that is not only engaging but inspiring as well. So, this election season – MX Player urges you to be the change you want to see and Express Yourself!