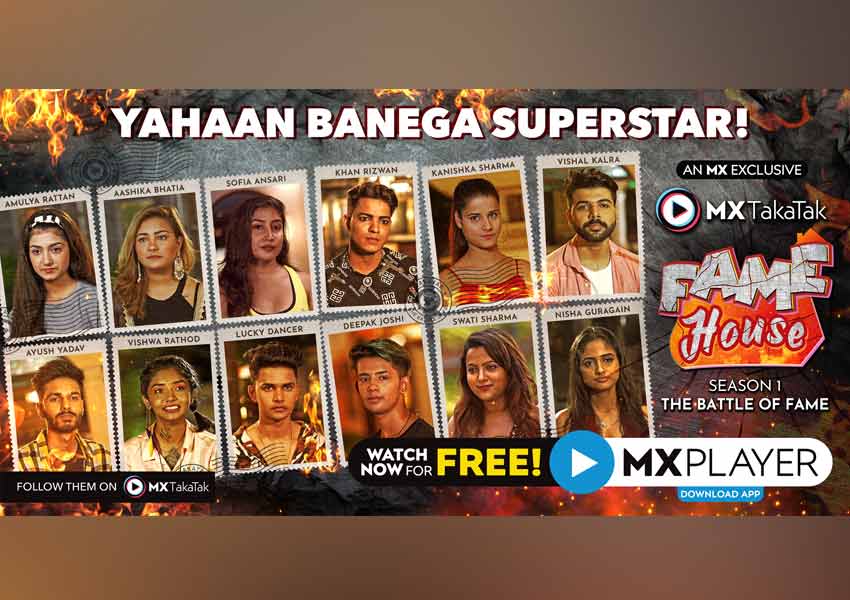 To strike a chord with the viewers, digital content creators thrive on bringing forth engaging and viral content. MX TakaTak launched its digital-first initiative – Fame House, pioneering change and making this a viable career option for millions of aspiring talents, with a vision to nurture the skills of its expanding community of content creators.

Released exclusively on MX Player, Fame House is a reality series wherein content creators are challenged with daily tasks to win the battle of fame. This has emerged as a springboard for the content creators as it was an instant hit among these millennials to become the next digital superstars. To persevere and fight for the chance to walk away with millions of additional followers as well as to live their dream of featuring in a web series, content creators across India have been waiting for the next season of Fame House.

In a beautiful location Goa, 18 content creators collaborated, created and chilled for 7 days in the first season. Professional help and the mobile-first content creation tools of the MX TakaTak app were the arms of the inmates of the house that truly opened up a new world of endless possibilities for the creators. All the creators in this edition of the show had various talent and forte; some were famous for making couple videos, some for their acting skills while the others were known for making concept videos. As they worked together, they gained an immense number of followers and also helped each other enrich their own portfolio and curate content pieces that were far more engaging.

Vishal Kalra said, “When I moved in, I had around 380K followers. Today, I have over 1 million followers. I don’t think the growth would have been this rapid and stable, if not for the Fame House”.

Fame House growth is not limited to short video space but also across platforms. Ayush Yadav, who is also a YouTuber, said, “I have been on YouTube longer than I have been on a short video platform. Ever since I have come back from the Fame House, fans across all my social media accounts have been going crazy.”

Another contestant Nisha Guragain said “All my videos have been seeing an upward spike in followers, but for me – what really stood out is that MX Player found a way to bring alive my dream and pushed us one step closer to stardom by creating our time at the MX TakaTak Fame House into a full-fledged reality series.”

Start watching Fame House on MX Player now, if you want to know more about their journey as influencers and take a sneak peek into the lives of your favourite content creator. To watch more of their fun videos, download the MX TakaTak app.