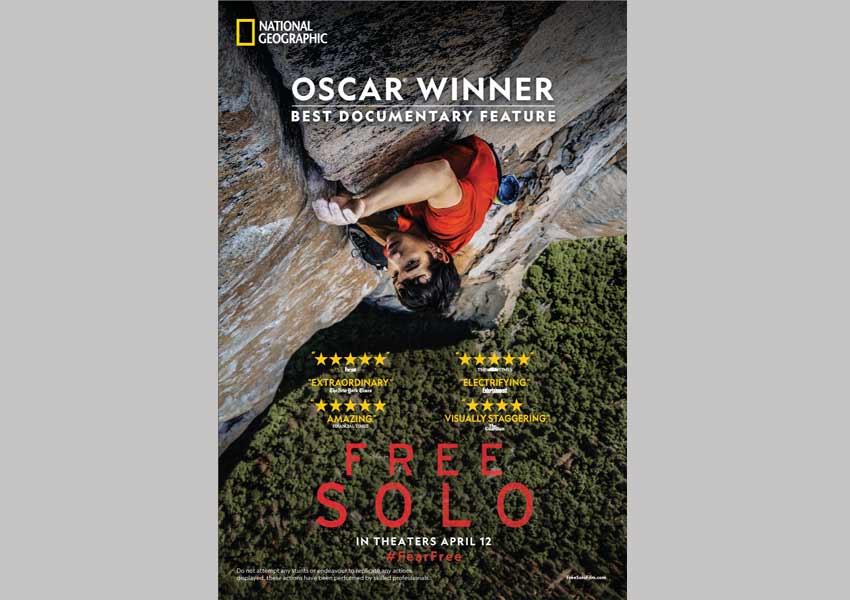 FREE SOLO, National Geographic’s Oscar-winning documentary is set for a theatrical release on April 12, 2019 in India, as announced by the brand today. Indian audiences have been eagerly awaiting the documentary after it was praised by most major international movie critics, like The New York Times which acclaimed the film as “an extraordinary gift to everyone who believes that the limit of human achievement is far from being reached”. FREE SOLO, which won the Best Documentary at both the Oscars & the BAFTAs, will release across theatres on Friday across key metros such as New Delhi, Mumbai, Bangalore, Chennai, Ahmedabad and cities like Chandigarh.

From award-winning filmmaker Elizabeth Chai Vasarhelyi and world-renowned photographer and mountaineer Jimmy Chin, the directors of the Oscar-shortlisted film “Meru,” FREE SOLO, a stunning, intimate and unflinching portrait of the free soloist climber Alex Honnold, as he prepares to achieve his lifelong dream: climbing the face of the world’s most famous rock – the 3,200-foot El Capitan in Yosemite National Park without a rope.

The film is an edge-of-your-seat thriller and an inspiring story of an athlete who challenges both his body and his beliefs on a quest to triumph over the impossible, revealing the personal toll of excellence. As the climber begins his training, the armour of invincibility he has built up over decades unexpectedly breaks apart when Honnold begins to fall in love, threatening his focus and giving way to injury and setbacks. Elizabeth Chai Vasarhelyi and Jimmy Chin have beautifully captured deeply human moments with Honnold as well as the death-defying climb with exquisite artistry and masterful, vertigo-inducing camerawork. The result is a triumph of the human spirit.

Commenting on FREE SOLO being watched by Indian audiences, Alex Honnold, says “When I know what I’m doing and I’m climbing well, then it feels meditative, kind of relaxing and beautiful. Jimmy and his crew did a really nice job setting up remote cameras and I was stoked that it’s going to result in some of the most remarkable footage. It’s amazing the way audiences have connected with the film and I feel extremely excited for the theatrical premiere of Free Solo in India by National Geographic. I really hope Indian audiences like it as much as the rest of the world.”

Commenting on the planned theatrical release, Gayatri Yadav, President & Head-Consumer Strategy and Innovation, Star India said, “For 131 years, National Geographic has been using the power of storytelling to inspire the explorer in all of us.  With jaw dropping cinematography led by award winning directors, Jimmy Chin and Elizabeth Chai Vasarhelyi, Free Solo is another endeavour that represents the very best of National Geographic. The film is a deep and highly personal exploration of passion, drive, determination, unimaginable risk, love, and hair-raising adventure. Free Solo’s momentous global release has not only captured audience’s attention but has also set several box-office records in the US. We are excited with the launch of this Oscar winning film in India. With National Geographic led outstanding cinematography, we are hopeful that it would be able to capture Indian audience’s attention and continue to break records.”

FREE SOLO will release in select theatres across India on 12th April.