NEWS18.com’s ‘Music For a Cause’ Campaign Fittingly Concludes at ReSound Concert 2017 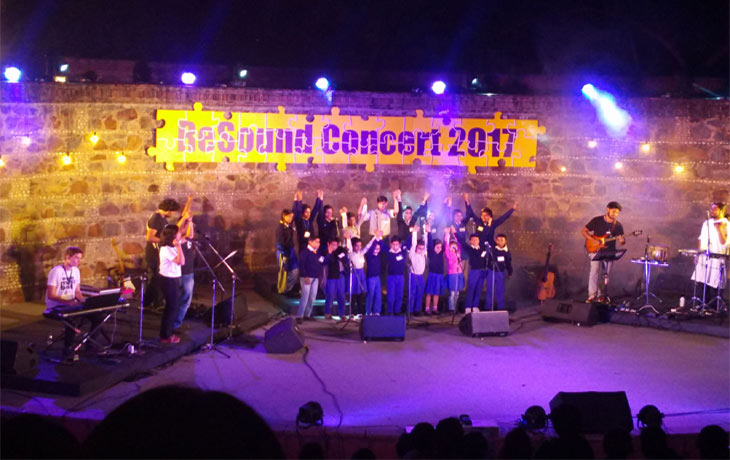 NEWS18.com, the pure-play digital news media site, ideated a unique one month campaign ‘Music for a Cause’ for lesser privileged kids who have a strong inclination towards music. Solely aimed at motivating them to live their passion, the campaign culminated at ReSound Concert 2017 organised by Music Basti on Sunday, Feb 26 in Delhi, which also saw the generous gifting of autographed musical instruments to kids from the NGO, donated by acclaimed musicians. It was a musical evening where every kid brought forward a unique perspective of the world with their songs.

While the performances of the kids struck multiple chords with the audiences, the biggest takeaway was the fact that the performances had a mixture of thought provoking and feel-good messages behind them. Students from Ark School, Lajpat Nagar performed a song which urged everyone to keep mother earth ‘clean and green’. The second performance by the school was based on ‘achieving dreams and spreading smiles’. The performance by Akshar School, Gurgaon was based on the theme of ‘Unity’, which was followed by a song which posed the question ‘Why War’, which made audiences introspect the harsh reality of our lives.

On conclusion of the month long ‘Music for a Cause’ campaign, Manish Maheshwari, CEO, Network18 Digital said, “We feel proud to be associated with Music Basti for ReSound Concert 2017. Kids from nine schools participated in the event, which was initiated to encourage them to showcase their talent. It was heart-warming to see the kids perform to songs created by them with such enthusiasm and zeal. Making this campaign even bigger, News18.com’s  team connected with acclaimed musicians like Vishal Dadlani, Ehsaan Noorani, Mohit Chauhan, Parikrama Band, The Other People and urged them to lend their support for the noble cause. We would like to thank the team of Music Basti for putting up a great show and motivating the kids by providing a platform such as this for them. ”

Performances by Katha School, Lajpat Nagar and South Extension revolved around ‘eliminating hatred’ and ‘achieving dreams’ respectively. The Govindpuri branch of Katha School performed mesmerizing numbers on the theme of peace and harmony. Vidya Bal Vihar School performed a thought provoking number based on humans choosing to tread the path of peace. Last but not the least, Vidya School from Gurgaon presented their perspective of a ‘happy world’ with their soul touching performance.