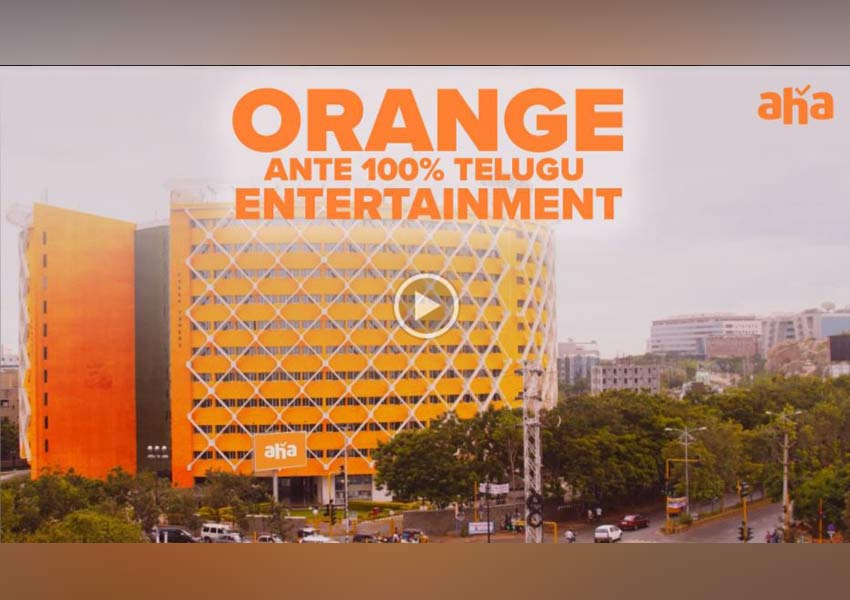 A 100% Telugu OTT streaming platform, aha, is entertaining its audiences since its launch in February 2020. Aha paints the town orange with the best in 100% Telugu content this time. This platform has become an absolute favourite of the audiences within a few months of its launch and is regarded as the go-to destination for unmatched, premium Telugu content as it has become a household name across Telangana and Andhra Pradesh. With a host of engaging and exciting entertainment aha also seeks to regale its audience apart from splashing colours of enjoyment.

Aha has already become a force to reckon with in the Telugu entertainment industry along with the extensive content offerings. Beginning with a bang of original series’ including both fiction and non-fiction, it continues to offer exclusive movie premiers with more than 150 blockbuster films. Catering to a large audience across the world, the streaming platform has successfully acquired superhit films such as OreyBujjiga, Colour Photo, Bhanumathi & Ramakrishna. The stop destination for entertainment in Telugu language, seeks to announce a massive line up of both original films as well as web series soon.

Aha released a zestful, catchy and foot-tapping brand anthem with the similar exhilaration and celebration amongst its viewers. You can watch it here. Acclaimed music composer, Devi Sri Prasad, launched the brand anthem which is composed by Yashwanth Nag. The song showcases how aha is winning the audience’s hearts through its extensive content catalogue.

While commemorating the array of content that resonates with the crowd, the sole purpose of the campaign is to welcome the festive cheer in every home. Team aha has conceptualised the brand film whereas PAD Integrated Marketing & Communications Pvt Ltd has created it. The Raghav Bhotika directed film circles around the underlying message of aha taking over Andhra Pradesh and Telangana and painting the town orange.

Sharing his thoughts, Ramu Rao Jupally, Promoter, aha, said, “We are overwhelmed by the incredible response to aha in less than just 9months of launch. With over 5 million downloads and 18 million unique visitors, we are one of the fastest-growing streaming platforms in India and our growth in terms of engagement, time spent, and subscriptions reflect this. We have a festive bonanza for audiences across the globe and through aha we want to cheer with wholesome family entertainment for Telugu-speaking audiences of all age groups across the country. The storyline, music, and color of the brand film drives home this very message. We want to thank the people of Andhra Pradesh and Telangana for their support and seek to be the one-stop 100% Telugu streaming platform filled with the regional nuanced flavor and vibe.”

Sharing his thoughts, Allu Aravind, Promoter, aha said, “aha seeks to serve its audiences with 100% premium Telugu content and we aim to make sure that for our audience Telugu entertainment is synonymous with aha. The brand anthem is a dedication to the Telugu people and an ode to my long-standing relationship with the people for over 30 years. This song encapsulates the spirit of aha from who we’re and what we want to be. We are excited to share the next leg of festive entertainment which kick-starts with an exciting Diwali Bonanza programming line-up. We are introducing a number of originals with some of the biggest stars and directors. Also planned is a special event featuring a special guest! We hope the audience continues to shower us with their love and support.”

Aha focuses on affordability and accessibility and hence the penetrative pricing strategy of ₹1 per day with the annual subscription of ₹365 is a steal deal in this region. For first-time subscribers, it is also offering a hundred rupee off following the festival bonanza.