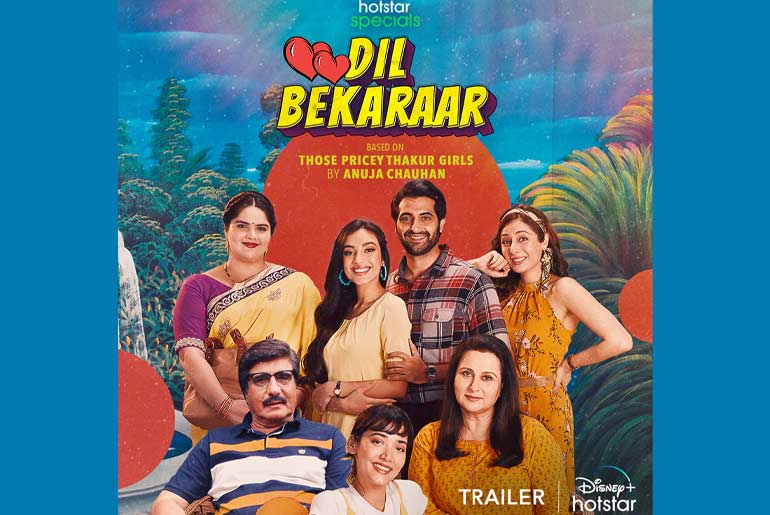 Will Debjani and Dylan’s ideological differences and professions pull them apart or draw them closer? Experience the charm and love of the 80s with the Thakur family as Disney+ Hotstar ushers in the nostalgia of the 80s. The highly-anticipated Hotstar Specials’ Dil Bekaraar follows the love story and the intense ideological clash between Debjani Thakur and Dylan Shekhawat. Produced by Sobo Films and directed by Habib Faisal of Do Dooni Chaar fame, Dil Bekaraar will gently transport the viewers to the golden times as they experience the simplicity and find relevance in the Thakur Family. Played by veteran actors like Raj Babbar, Poonam Dhillon and Padmini Kolhapure and upcoming talented actors like Sahher Bambba, Akshay Oberoi, Medha Shankar, Sukhmani Sadana among many others; the characters portray a tale of humorous family drama with a backdrop of liberalisation and journalism. Dil Bekaraar is all set to release on Disney+ Hotstar on 26th November.

Talking about her time on the sets of Dil Bekaraar and working with director Habib Faisal, actor Padmini Kolhapure said, “It felt like home on the sets of Dil Bekaraar. There were many memories coming to my mind while on sets; it was a walk down the memory lane. But most importantly, working with Raj Ji and Poonam Ji brought immense comfort for me. Habib Faisal has an eye for detail; he leaves no stone unturned. He needed everything to be perfect and he ensured it was. He has done complete justice to recreating the 80s magic; I was absolutely amazed to be on sets.”

Enjoy the charming age of the 80s with the Thakur Family and their five feisty girls in the upcoming Hotstar Specials’ Dil Bekaraar only on Disney+ Hotstar on 26th November.

Hotstar is an Indian brand of subscription video-on-demand over-the-top streaming service owned by Star India and operated by Disney Media and Entertainment Distribution, both a division of The Walt Disney Company.