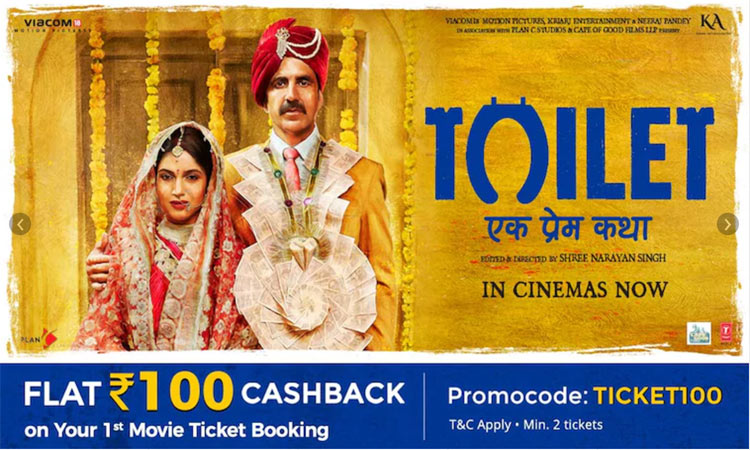 Paytm has announced a ₹100 cashback for the Akshay Kumar and Bhumi Pednekar starrer Toilet: Ek Prem Katha. The cashback can be redeemed by first-time customers with the promo code TICKET100 while booking a minimum of two tickets for the movie on Paytm’s online movie ticketing platform.

Toilet: Ek Prem Katha is a satirical comedy that tackles the problem of lack of proper sanitary facilities in India, especially for women. The movie revolves around Keshav (Akshay Kumar) whose newlywed wife Jaya (Bhumi Pednekar) refuses to stay with him for not having a toilet in his house. Keshav vows to equip villages across the region with toilets, and the struggle to win her love, one toilet at a time, forms the crux of the narrative. An enchanting story with the perfect dose of comedy, thrill, excitement, and drama, Toilet:Ek Prem Katha is a bold attempt to challange orthodox, unscientific and often harmful customs prevalent in Indian society. The movie is co-written by popular storytellers Siddharth Singh and Garima Wahal, who also penned the critically acclaimed Sanjay Leela Bhansali blockbuster Goliyon Ki Raasleela Ram-Leela.

The film has received accolades from across the country for its choice of topic and intention to create awareness around an oft-ignored fundamental need.

Tags:
Previous Article
Wandertrails Partners with Uber to bring an array of experiential stays and immersive activities to all riders
Next Article
On this Independence Day, EsselWorld salutes the real heroes of India

On this Independence Day, EsselWorld salutes the real heroes of India
MediaInfoline Aug 11