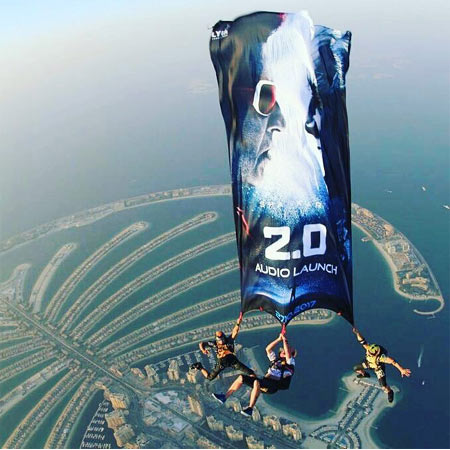 Percept Activ bagged the prestigious mandate of conceptualizing and executing the audio launch of the movie ‘2.0’ featuring the legendary superstar Rajnikanth and Bollywood action star Akshay Kumar. The Audio launch of 2.0 was held on 27th October 2017 at the Burj Park, Dubai and witnessed a crowd of over 12,000 people attending the show.

2.0, the upcoming sci-film has Rajinikanth, Akshay Kumar and Amy Jackson in the lead roles and is being produced on a budget superseding Rs 400 crore. Lyca Production is bankrolling the 2010 blockbuster Enthiran at the cost of more than Rs 400 crore, making it the most expensive film out of India and the second most expensive film in Asia (Asura, the Chinese epic fantasy, so far being ranked as the costliest Asian film). 2.0 will scheduled to hit the screens early 2018 and is expected to be released in 15 languages.

This is the first time ever that such an event has taken place at Dubai. The event broke records as the biggest audio launch for an Indian movie to have taken place in Dubai. Being Rajinikanth’s first trip to Dubai, the audio launch set a benchmark for international film events. It was a tri-lingual mega show hosted in English, Tamil and Telugu by Karan Johar, RJ Balaji and Rana Daggubati.

The event kick-started with Shankar’s performance who made a grand entrance on a 20 foot train which wowed the audience and kept them in anticipation of the exciting presentation ahead.  The event showcased performances from Bosco Ceasar’s team of dancers who played a tribute to Rajnikanth’s legendary reign in the film industry which ended with Rajnikanth himself making a dramatic entry on stage via the hydraulic equipment. Amy Jackson sizzled on stage with her dance moves to the song Ethiran Logathu Sundari followed by Akshay Kumar’s act where he entered the stage with a large set of wings keeping his character in the film in mind. Helio angels displayed their talent with their props which had the logo of robot 2.0 on them. The grand show culminated with a performance from AR Rahman, where he performed live along with the 75 piece Macedonian symphony. The gala event saw the who’s who attend including The Prince of UAE, singer Vijay Yesudas, Resul Pookutty and Dhanush along with his family.

Percept Activ also conceptualised the press conference for The Audio launch of 2.0 which has never been done before for any Indian film. The celebrities arrived on a chopper and landed on the helipad at Burj Al Arab. On the same day a team of skydivers jumped with a 2.0 flag right above Palm Jumeira, which received a lot of attention from the media. The makers of 2.0 revealed important updates at the press conference of the film 2.0 in the heart of the city. The interaction featured the film’s top-billed cast and crew including Superstar Rajinikanth, Akshay Kumar, director Shankar, A.R. Rahman, Amy Jackson, and Subaskaran Allirajah, and the Chairman of Lyca Productions.

Commenting on the successful show, Sameer Sethi, Associate Vice President, Percept Activ said, “It’s a privilege for us to have received the entire mandate to manage the Audio launch of the movie 2.0. The event attracted a diverse and massive audience and was streamed live therein attaining a lot of positive feedback. The entire show was designed with an aim to draw the attention of the masses via amazing visuals, SFX, music and stunning performances from the stars. Percept has played a crucial role in the launch of 2.0 right from conceptualization to the entire ground management. Our Team approached Lyca with innovative never before attempted ideas including the chopper landing on the helipad, skydiving and many other suggestions to make the event even more memorable. An event of this magnitude involved a great level of prediction, preparedness and back-ups for any eventuality that might occur. Kudos to the entire team who worked tirelessly to pull off an amazing and spectacular show overseas that has raised the benchmark for future shows.”

Tags:
Previous Article
TVF brings back Season 2 of ‘Bachelors’ after a highly successful Season1
Next Article
Vikas Mehta named one of the most influential leaders in digital marketing by World Marketing Congress 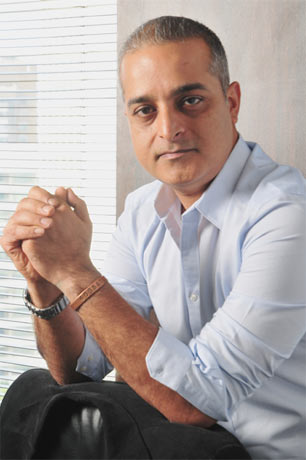