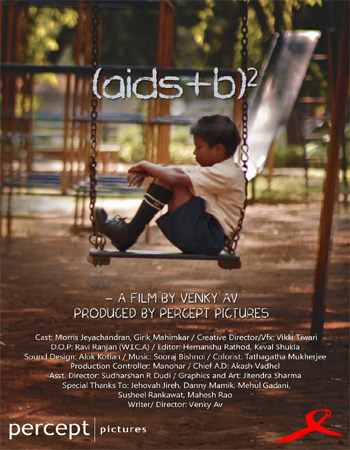 Percept Pictures, the fully integrated Content Creation, Aggregation and Distribution Company for Percept Limited has in full throttle delved into the digital medium of filmmaking and released their very first short film titled (aids + b) ². The film has been directed by Venky AV and produced, distributed and marketed by Percept Pictures.

Percept Pictures has a rich history of accomplishments in mainstream cinema. It has established a strong foothold by consistently delivering some of the biggest films and hits in the past decade. Percept Pictures now believes that it is the right time to duplicate this success in the digital space. The digital medium has seen tremendous growth in recent times with all the top production houses jumping on the bandwagon; Percept Pictures didn’t want to be left behind.

Short films have always been treated as something of a poor cousin to feature films across the globe. However over the past decade short films have made it big, especially internationally and have a lot of dedicated film festivals for them. It’s a shorter, interesting medium coupled with strong scripts, original ideas and high production values. Short films are ideally suited to the internet, wherein users demand short, sharp bursts of entertainment that they can consume on the move, at work, at home and increasingly on their mobile phones.

The content that Percept Pictures will be creating and developing will primarily be divided into the following three categories- India, Travel and Socially Relevant content. They plan to experiment with various formats be it music videos, web-series, short films etc.

(aids + b)² is an interesting black comedy about a 10 year old school boy whose life turns upside down on learning about the existence of a disease called AIDS. The primary intention of the film is to encourage open and right conversation on AIDS and not treat it as taboo. Though the idea is a serious one- to bust the myths around AIDS, the film is not. It is a light-hearted film while addressing a very grave issue and maintaining complete cinematic aesthetics.

The film’s promotions have been met with an overwhelming response, which mainly happened on social media networks. Having gained the right kind of momentum the film required, it released on YouTube on 14th Feb, 2016.

Percept Pictures eventually plans to create full length films for the digital space. However, that’s just one aspect of it. They plan to give young and aspiring filmmakers a chance to explore and create their own content.  Percept Pictures has always given opportunity to new talent. Their very first feature film- “Pyar Mein Kabhi Kabhi” had numerous debutants like Vishal-Shekhar, Salim Sulaiman and Shaan. Shoojit Sircar, Nandita Das and Madhur Bhandarkar are just a few of the many veterans of today who were discovered by Percept Pictures.

Percept Pictures now wants to take this legacy into the digital space and empower the youth to tell their stories. They have an ambitious plan to try to launch at least 25 new Directors in the next 5 years regardless of the medium. They are more than happy to provide a stable platform and all the tools and support necessary to build the next generation of directors in the country. Digital is the way of the future and having started out with a short film like (aids + b) ², directed by a young filmmaker, Percept Pictures wants to be a trendsetter in this space.

Commenting on this new venture, Danny Mamik, Chief Operating Officer, Percept Pictures said, “The most important vision at Percept Pictures is to give the youth a platform to express themselves. Any young aspirational story teller whether from Mumbai or anywhere in this country should feel compelled to come to us to say their story and we will do our very best to give that story every opportunity to be heard and seen. We are very excited with this new pathway and hope that this charts a whole new territory in film making.”