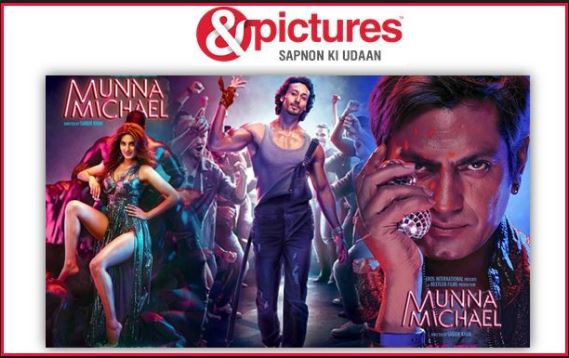 From death-defying stunts to his smooth dance moves, Tiger Shroff has impressed the audience and won the hearts of millions. &pictures, Naye India Ka Blockbuster Movie Channel, will air the young Actor’s critically acclaimed ‘Munna Michael’ on Friday, 6th July 2018 at 8pm. Directed by Sabbir Khan, the movie stars Tiger Shroff and Nawazuddin Siddiqui in the lead along with Nidhhi Aragrwal who makes her Bollywood debut. Munna Michael is the story of an underdog who has big dreams and takes you on an emotional roller coaster of passion, romance and betrayal. With fully-loaded action sequences, this entertainer promises to leave the audience asking for more!
Munna Michael takes you through the journey of an orphan boy named Munna (Tiger Shroff). He is raised by a Michael Jackon fan who is a struggling dancer (Ronit Roy) and also shares his name with the star. Having been brought up in a Mumbai chawl makes Munna adept at making quick money by pulling off cons. When Munna heads to Delhi, he meets Mahinder Fauji (Nawazuddin Siddiqui) who is a local Don. This 42-year-old gangster who doesn’t think twice before shooting a person has fallen in love with the young and talented Dolly (Nidhhi Agerwal). With the desire to win over his lady love, Mahinder hires Munna but all hell breaks loose as Munna ends up falling in love with Dolly. Mahinder then sets out to avenge Munna’s betrayal which leads to a series of action-packed sequences.
Will Munna be able to combat Mahinder and his gang of hooligans?
Don’t miss this thrilling dose of action and drama as &pictures airs Munna Michael on Friday, 6th July 2018 at 8pm.