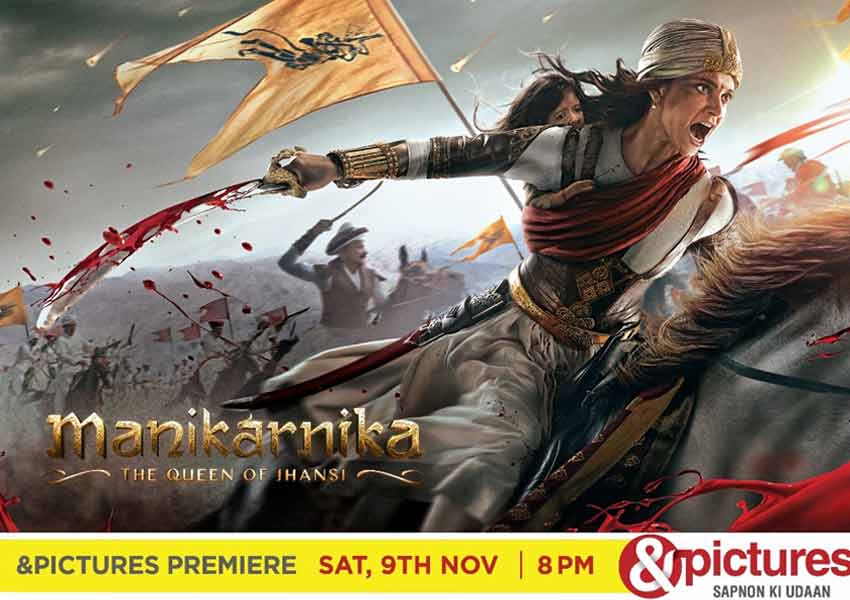 Azadi Ke Liye Ladi Jee Jaan Se, Di Apni Qurbani Shaan Se, this line perfectly describes India’s feisty warrior queen – Rani Laxmi Bai, the nation had ever seen. An embodiment of grit and determination, Rani Laxmi Bai fiercely fought for her nation in the war field and didn’t give up till her last breath. The endless love and respect displayed by her for her country is an inspiration for all of us, so much so that the British praised her by saying that “She was the bravest and best military leader of the rebels”.  To celebrate the bravado of the warrior queen, &pictures – Naye India Ka Blockbuster Movie Channel will air Manikarnika: The Queen of Jhansi on Saturday, 9th November at 8 pm ahead of her 184th birth anniversary as a part of their property ‘Saturday Premiere Nights’.

Manikarnika: The Queen of Jhansi, a war drama that narrates the story of a fierce queen who refused to cede control of her kingdom to the British following her husband’s death. Named as Manikarnika at birth, and renamed ‘Lakshmi Bai’ post her marriage, she played an important role in Indian history. Marking her directorial debut and taking centre stage is Kangana Ranaut who essays the titular role of the warrior queen. Along With her, the movie stars a stellar cast comprising of Ankita Lokhande, Atul Kulkarni, Mohammed Zeeshan Ayyub, Jisshu Sengupta, Danny Denzongpa and Suresh Oberoi, in pivotal roles.

Actor Kangana Ranaut who essays the titular role said, “Manikarnika is an important film, especially for the young generation today. The urban way of life demands that we mostly think about ourselves. Seldom do I see people contributing anything themselves towards improving the current state of affairs. Rani Laxmibai’s had said that ‘We might be slaves because of our ancestors, but I am going to single handedly change that.’ It is important to keep these thought processes alive. So, although it’s an action film, the story is the hero, and that’s how it should be. With Manikarnika making its premiere on &pictures, we hope the audience learns from the film, while also enjoying the cinematic experience that we have aimed to produce”

Ankita Lokhande who made her Bollywood debut with Manikarnika said, “When I was offered the role of Jhalkari Bai, I was inspired by her brilliance. She was an unsung hero and I felt that I should take it up and help bring alive this untold story. Jhalkari Bai was a lesser known warrior in Rani Laxmibai’s army and hence there is very little information available about her. While I have grown up reading about Rani Laxmibai, it was the power that Jhalkari Bai had among the many other women in Rani Laxmibai’s army that drove me towards taking up this role. The premiere of Manikaranika on &pictures is a chance for the viewers to witness the story of the legendary lady warriors who fought alongside Rani Laxmibai in the war of Independence.”

Witness Rani Lakshmi Bai’s grit, determination and valour as &pictures is all set to air Manikarnika on Saturday, 9th November at 8pm