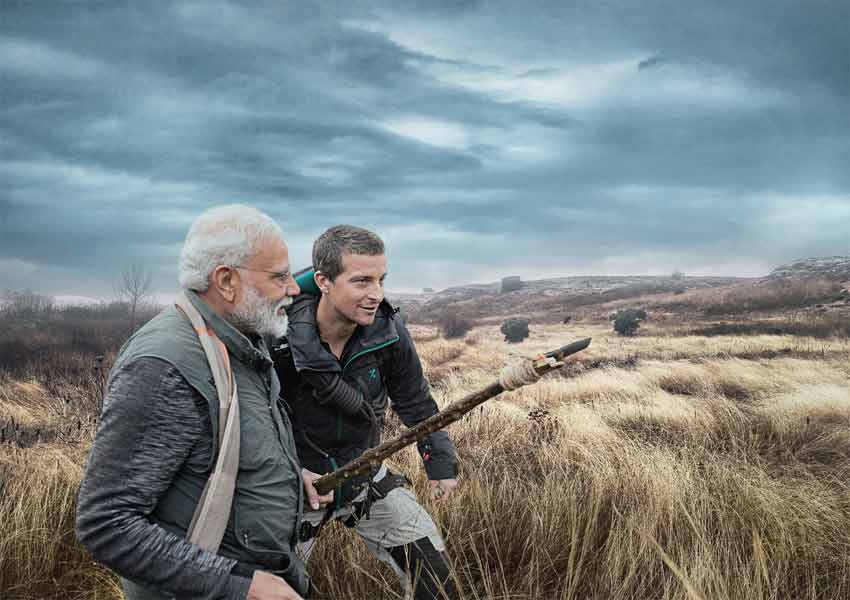 The energetic Prime Minister of the world’s largest democracy, plus a fearless and renowned adventurer and India’s oldest National Park situated in the lush green forests of India’s Uttarakhand, where wild animals roam free…Sounds interesting?

This is what the world will watch during the historic Discovery Exclusive, ‘Man Vs Wild with Bear Grylls & PM Modi.’

This special episode, which has been shot in the Jim Corbett National Park, will be a frank and freewheeling journey, throws light on wildlife conservation, highlighting issues related to environmental change. The adventurous pair even have to make a raft & cross a jungle river together!

One of the most unmissable parts of the programme is the Indian Prime Minister talking at length about his own experiences of living in the midst of nature and demonstrating his adventurous side.

Speaking about the show, Prime Minister Narendra Modi, said, “For years, I have lived among nature, in the mountains and the forests. These years have a lasting impact on my life. So when I was asked about a special programme focussing on life beyond politics and that too in the midst of nature I was both intrigued and inclined to take part in it. For me, this show presents a great opportunity to showcase to the world India’s rich environmental heritage and stress on the importance of environment conservation and living in harmony with nature. It was a great experience spending time in the jungle once again, this time with Bear, who is blessed with indefatigable energy and quest to experience nature at its purest.”

“It is such a privilege to be taking Prime Minister Modi on an adventure into the Indian wilderness and I feel truly honoured to get to spend time with this remarkable world leader. The wild reminds us that we need each other and that together we are stronger. I am so excited to spend time with the PM and to get to know the man who leads this great nation,” said, Bear Grylls.

This special episode will be showcased in more than 180 countries across the world on Discovery network of channels.

Megha Tata, Managing Director – South Asia, Discovery Communications India, said, “We are honored to host Prime Minister Narendra Modi in this historic episode of ‘Man Vs Wild’. We hope that by harnessing the power of the Prime Minister and the global premier on Discovery, the show will create awareness about India’s rich biodiversity and sensitise people about the importance of conservation of wild animal species.”