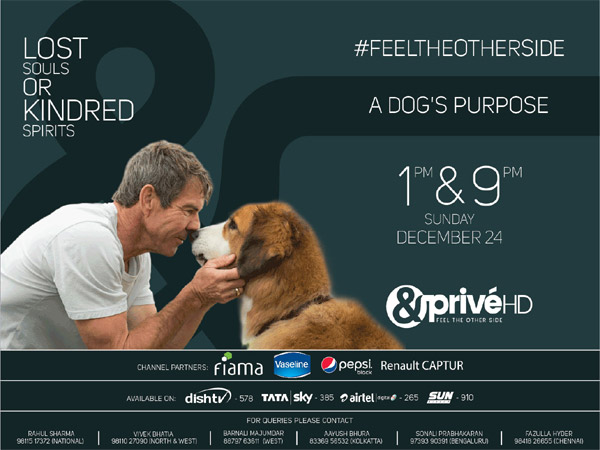 &Privé HD, the newest destination for nuanced cinema, is all set to bring the Indian television premiere of the movie, ‘A Dog’s Purpose’ on 24th December at 1:00 PM and 9:00 PM. The film is directed by Lasse Hallström and stars acclaimed actor, Josh Gad as the voice of the dog along with Dennis Quaid and KJ Apa.

The comedy drama which is based on the 2010 novel of the same name by Bruce Cameron, follows the story of the multiple lives of a dog named Bailey who is reincarnated four times over a span of fifty years and his quest to find his true purpose in each life. Narrated from the viewpoint of Bailey, the film highlights his second life as a golden retriever and the bond he forms with a young boy, Ethan (Apa), and their reunion years later with Ethan as an older man.

Soulful and emotional, the film poignantly illustrates how much we need love, affection and companionship – the kind a dog can provide as well as the kind that we need from other humans.