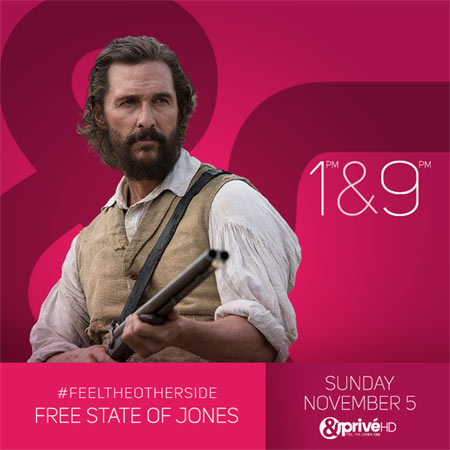 &Privé HD, the newest destination for premium cinema, is all set to bring the Indian television premiere of the much-awaited movie, Free State of Jones on 5th November at 1:00pm and 9:00pm. The riveting historical drama by acclaimed director Gary Ross, is based during the American Civil War and stars Academy Award winning actors Matthew McConaughey and Mahershala Ali in central roles.

The film chronicles the story of Newton Knight (McConaughey), a poor farmer from Jones County, Mississippi, who flees the army where he had served as a battlefield nurse after witnessing Confederate authorities confiscating his neighbours’ livestock and grain. He goes on to takes refuge in the bayou with a small group of slaves who have run away from a nearby plantation, and as their commander, he leads the guerrilla army against the Confederacy during the war.

McConaughey’s portrayal of Knight is impeccable as he embodies an ordinary man radicalized by his desperate circumstances. Brought together by a common fight against poverty, we see Knight battling to hold this coalition together as a political force in the face of Ku Klux Klan terror.

Don’t forget to catch the Indian television premiere of ‘Free State of Jones, this Sunday, 5th November at 1:00PM and 9:00PM only on &Privé HD