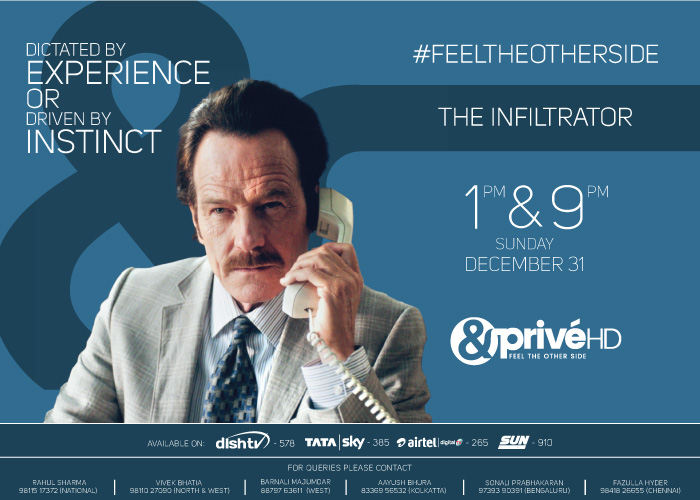 &Privé HD, the newest destination for nuanced cinema, is all set to bring the Indian television premiere of the movie, The Infiltrator on 31st December at 1:00 PM and 9:00 PM. The film is directed by Brad Furman and stars acclaimed actor Bryan Cranston, Diane Kruger and John Leguizamo amongst others.

The crime drama is based on the autobiography of the same name by Robert Mazur, a U.S. Customs special agent, who in the 1986 helped bring down the narcotics empire of infamous kingpin Pablo Escobar’s money-laundering organization. Despite specializing in deep undercover assignments, Mazur (Cranston) is faced with his most challenging assignment yet, as he goes undercover as a corrupt businessman alongside Kathy Ertz (Kruger) and Emir Abreu (Leguizamo) to bring down the notorious drug lord.

Gripping and elevated by Cranston’s superb central performance, the film creates enthralling suspense on what undercover agents do while trying to keep their soul meticulously under wraps.

To catch the Indian television premiere of The Infiltrator, tune in to &Privé HD on Sunday, 31st December at 1:00 PM and 9:00 PM.