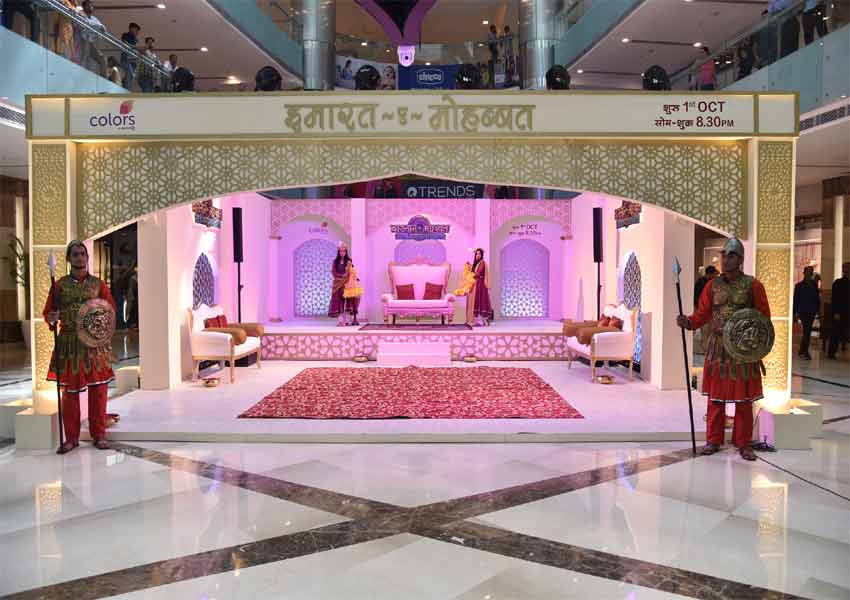 COLORS brings viewers the greatest love story there ever has been: DASTAAN -E-MOHABBAT : SALIM ANARKALI that is premiering tonight on the channel in the 8.30pm primetime slot. Presented by Dabur Red Paste and powered by MDH Deggi Mirch, the show tells the tale of charming Mughal prince Salim (Shaheer Sheikh) and the mesmerizing rakassaAnarkali (played by Sonarika Bhadoria) who challenged the norm, defied societal class differences and chose to fight for their love.

Its larger than life promos bring alive the Mughal empire with its distinctive culture and unparalleled grandeur. The channel has formulated and executed a 360-degree campaign that positions the show as the magnum opus of all love stories with an innovative and high buzz media outreach across TV, Radio, OOH and Print in key markets.

Highlights of the mass media campaign:

The channel has furthermore created a huge installation called Imaarat – e – Mohabbat: An epitome of love, this is built in Delhi, that not only amplifies the historical opulence of the Mughal Empire but also is a physical manifestation of true love which propagates the idea that love conquers all odds. This beautiful monument – ‘Just Doesn’t tell the tale of love but will listen to the unheard Dastaan-E-Mohabbat of the TG as well. Through this on-ground activation that is amplified with Big FM across India, we are finding India’s Biggest Daastan-E-Mohobbat in its true sense ‘Live’ on the weekend before the show launch.

Taking over the Mumbai Metro Stations, key locations have been branded and will witness the era come alive with an Anarkali Dance Flash Mob/ Mughal Arch Gates & branding. Tapping an unconventional medium of Traditional Clothing Boutiques, COLORS has also branded boutiques with the show creatives in Delhi. At the India’s biggest women Marathon, Pinkathon at Delhi, 10,000+ women gracefully formed a larger than life flash mob wearing the Anarkali caps, on the specially crafted Qawalli track from the show.   The Colors Golden Petal Club will see engagement in 9 key cities across Uttar Pradesh with the leads visiting select venues.

On the digital front, the channel has planned a high buzz activity that caters to over 12 mn + prospective viewers on social media platforms like Facebook & Zapr, a 360-degree tour to bring audiences the spectacular sets, a dedicated Salim Anarkali photo gallery and a motion graphic post.

The eternal profession of love and passion between Salim and Anarkali has been immortalized in history and is now being brought to life with a tightly woven narrative. Produced by Writers’ Galaxy,this magnum opus boasts of an ensemble cast with veteran actor Shahbaz Khanessaying the role of Akhbar, Gurdeep Kohli Punjjplays Jodha and Aruna Iranias Hamida Begum.  Much loved television faces like Piyush Sahdev, Tasneem Sheikh and Parvati Sehgalwill also be part of this rebellious love drama.

Watch this epic saga starting October 1st, every Monday to Friday at 8.30pm only on COLORS.