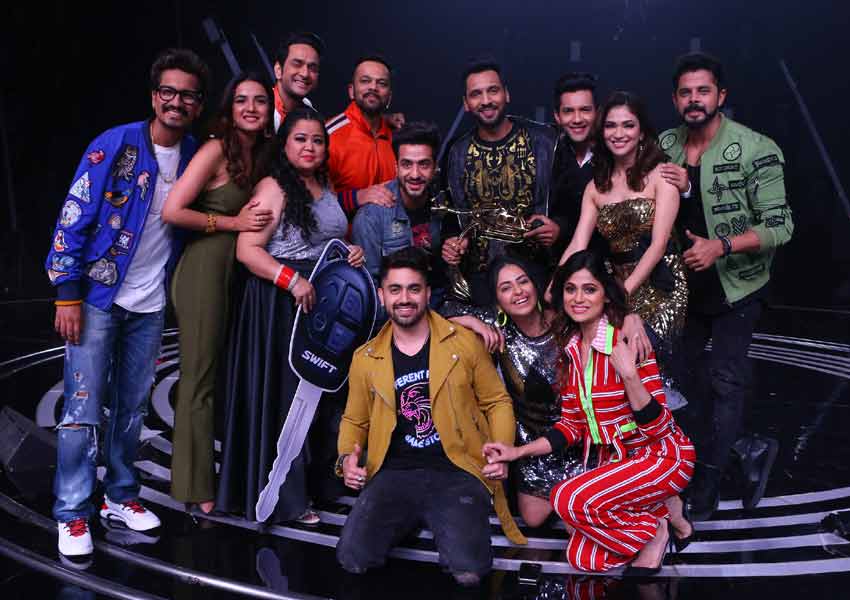 COLORS Khatron Ke Khiladi 9 presented by Maruti Suzuki Arena draws to a close with Punit Pathak crowned as the ultimate Khiladi. The build up to the winner moment of this declaration was as nail-biting as ever, with Khatron Ke Khiladi truly living up to its reputation as one of the most adventurous show on Indian television.

From a mix of stunts featuring not only heights, water, creepy crawlies and wilderness, but also some of the wildest experiences that changed the contestants’ perspective of fear altogether. In the nerve-wracking stunt during the grand finale, Punit Pathak’s determination and strong headedness helped him rise as a winner over Aditya Narayan and Ridhima Pandit. Rohit Shetty had designed a complete Bollywood dhamakedaar finale stunt. The stunt was a combination of height, speed and dexterity. With a car, truck and a helicopter as a part of the stunt, all the three contestants were really geared up to perform the last stunt of the season. But Punit’s swiftness and accuracy, made him win this task, defeating Ridhima and Aditya.

It’s no surprise that Punit Pathak emerged winner. Right from the beginning, he looked like he had participated just to win. He completed his tasks well in time, and never entered the elimination round. His competitive nature, clubbed with his outgoing and fun-loving personality, was a delight to watch. However, the highlight of his performance during the course of the season was when he selflessly performed a stunt for an injured Aditya Narayan when he did not have to. Aditya, who had sustained an eye injury during the course of the show, was in danger of getting into the elimination round because of the predicament that he was in. Not wanting his friend to suffer because of an injury, Punit went ahead and performed the stunt on his behalf. Not only that, the stunt was so good that he got the highest score for Aditya during that round. Punit even went ahead and did his stunt, once again highlighting his hunger to win the competition.

Speaking about his victory, Punit Pathak said, “Nothing comes easy for me this win was due to sheer hard work, focus, determination and self believe. It feels great to be crowned as the ultimate winner of Khatron Ke Khiladi 9. Winning a show that directs its participants to face their fears and overcome them, does wonders to their confidence. I would like to thank Rohit sir, my fellow-participants, and the team at COLORS for this opportunity.”

Commenting on the Season finale said, Nina Elavia Jaipuria, Head – Hindi Mass Entertainment and Kids TV Network, Viacom18, “This season of Khatron Ke Khiladi has been phenomenal right from day one. It had the right mix of action, adventure, comedy and entertainment. Big congratulations to the winner and all the other contestants and most of all, Rohit Shetty for bringing alive the spirit of adventure. As we draw curtains on this season, exceptional entertainment continues on COLORS as we launch the third season of Rising Star – India’s first Live singing reality show. With some stellar contestants and judges, this season will be the one to watch out for.”

Speaking about the Grand Finale of Khatron Ke Khiladi 9, Manisha Sharma, Chief Content Officer – COLORS, said, “This has been by far the best season of Khatron Ke Khiladi with a great mix of entertainment, stunts and thrills. The tremendous response that we have received from the viewers have motivated us and we are excited for the next season. I would like to thank Rohit Shetty, the daredevil Khiladi’s and the entire team that helped us put this show together. Also, heartiest congratulation to Punit Pathak for winning the trophy”.

Summarizing the season, Task master Rohit Shetty, commented, “Watching the participants push their boundaries has always been an incredible experience and I have witnessed that best on Khatron Ke Khiladi. Punit Pathak has been a well deserving winner as he fought all odds and took all the challenges head on. I am extremely proud of each and every contestant who bravely fought their fears. Together we had a great time and a memorable experience.”

Abhishek Rege, CEO, Endemol Shine India said “As an another spectacular season of Khatron Ke Khiladi draws to an end, it’s time to congratulate who ended up being the most fearless of them all. A special thanks to our host and task-master (literally)Rohit Shetty and all our intrepid contestants for surviving one of our most challenging seasons yet. It’s back to the drawing board for us at Endemol Shine India as we work on new dares and challenges for the next Khatron keKhiladis”.

The finale of the show was indeed a grand one with the former host Akshay Kumar giving a live parkour demo to the participants. After his demo, the original Khiladi asked the participants to perform this heart thumping stunt. The comical duo Bharti Singh and Harsh Limbachiyaa repeated a previous act called ‘a fear, mind you’ where they kissed creepy crawlies, much to the amusement and delight of the other participants. The finale was also graced by the presence of the Rising Star expert panel i.e Neeti Mohan, Shankar Mahadevan and Dilit Dosanjh. Being the most celebrated and awaited reality show, Khatron Ke Khiladi will continue the legacy of delivering unmatched drama and action in seasons to come!