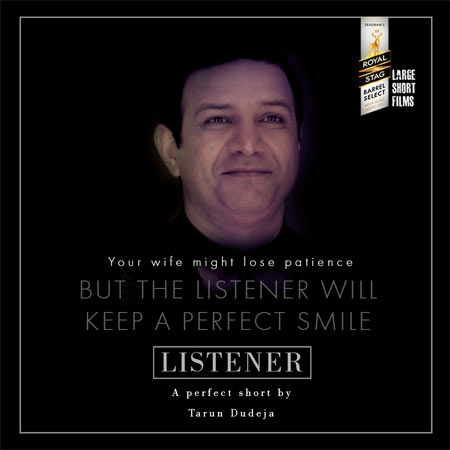 Royal Stag Barrel Select Large Short Films presents the multiple-award winning short film ‘Listener’, directed by Tarun Dudeja and produced by Sanjeev Kumar Nair. Starring Kumud Mishra, Yusuf Hussain, Shivani Tanksale and Shashank Arora, the short showcases the story of a father who has a knack for telling storied to his daughter and is hired as an hourly paid listener.

Commenting on the release, Raja Banerji, Assistant Vice President, Marketing, Pernod Ricard India, said “We are extremely delighted to release ‘Listener’ on our platform Royal Stag Barrel Select Large Short Films. We feel proud to associate with the talented director Tarun Dudeja. We have seen how the short film industry has grown and evolved over the past few years and we are glad that our platform is a perfect destination for meaningful and creative shorts. These films are not only attracting great audience but also receiving multiple awards and recognitions in India and across the world. Barrel Select Large Short Films has contributed immensely to the short film industry and we will continue to encourage and motivate talented film makers to freely showcase their work through our platform.

What makes ‘Listener’ interesting is the fact that everyone needs to be heard, everyone needs an empathetic ear, be it an old man who discusses about his family, a lady sharing her road trip experience or a man who shares about his relationship coming to an end. As a matter of fact, even the protagonist in the film who is professionally a listener likes to talk and share stories with his daughter. This short has been recognized and awarded at several platforms such as Hindustan times Kalaghodha arts film festival, 16th New York Indian Film Festival, 7th Jagran Film Festival, 8th Jaipur International Film Festival amongst others. The unique film has been directed by Tarun Dudeja, the brilliant director and produced by Sanjeev Kumar Nair who has also showcased his work in films like Saath Khoon Maaf, Ghanchakkar, Raja Natwarlal amongst others.

Talking about the film, director Tarun Dudeja said, “I am proud to release ‘Listener’ on Barrel Select Large Short Films. It is a great platform and a creative outlet for filmmakers like us. I would like to thank them for the brilliant work that they are doing. I feel in today’s day and age everyone wishes to have a listener in their life and I believe that our viewers will be able to relate to this film a lot.”

Tags:
Previous Article
Win chance to watch your favourite sports stars LIVE with ‘MNX Super League’
Next Article
Are all your friends for real? The trailer of Kaushiki makes us think

Are all your friends for real? The trailer of Kaushiki makes us think
MediaInfoline Apr 23