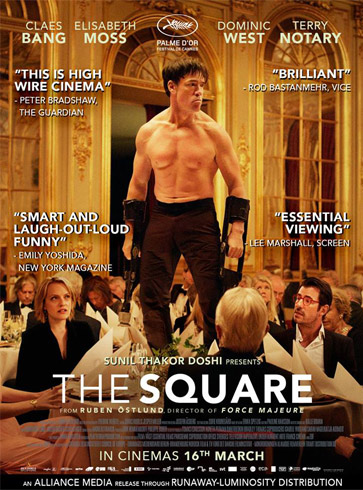 Oscar-nominated Film ’The Square’ is all set to release in Mumbai on 16th March 2018. Starring actors Claes Bang, Dominic West, Elizabeth Moss and Terry Notary, the movie is directed by award-winning Swedish film-maker Ruben Ostlund, who is also known for his movie Force Majeure. The Square is a funny satire featuring different aspects of an urban lifestyle and a hilarious take-down of arrogance and elitism found in upper middle class art circles.

The story revolves around the installation of a project at the museum and how the upper middle class inner city liberals try to socialize with each other having an antisocial mindset. The movie also promises some of the finest surprises; precisely dark and cinematic scenes you’ll ever encounter.

The film had a world premiere in 2017 at the Cannes Film Festival, where it received positive reviews and won the Palme d’Or. It further went on to win another six European Film Awards, including Best Film; two Guldbagge Awards, including that of Best Director. It also received nominations for the Academy Award for Best Foreign Language Film at the 90th Academy Awards.