“Sabrang” revolves around talented generation next looking for careers abroad 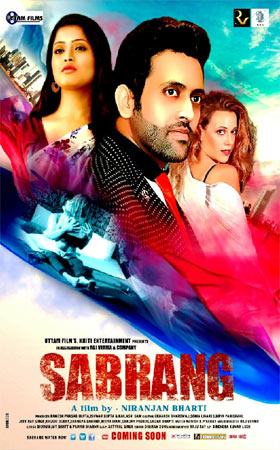 Time and again one does ask that why do bright and talented young generation of our country wants to work abroad? Every year these statistics significantly increases too. The upcoming Hindi feature film “Sabrang” which is jointly produced under the banner of Uttam Films, Kirti Entertainment and Raj Verma & Co., highlights on this issue. Directed by debutant Niranjan Bharti for producers Ishwar Gupta, Ramesh Gupta and Kailash Saw, the film thoughtfully evokes the subject on talented young generation preferring to profusely work on foreign shores rather than our own country. Friday, 17th November 2017, “Off The Grid” Restaurant at the busy link road at Andheri (West) was a grandiose affair with the entire unit, star cast, family members, well-wishers, members of the fourth estate, paparazzi’s having a field-day. Nupur Gupta and singer Saket also made their presence felt. The teaser was unveiled and the music comprising of 6-melodious numbers was launched under the label of SRK Music Company helmed by Roshan.

Niranjan Bharati is a resident of Ranchi in Jharkhand. This is his first feature film as an independent director. He is working in the film industry since last 9-years in the capacity of assistant director and associates one with different makers in serials, films, short films, commercials and documentaries.

“Sabrangis a romantic drama,” states Niranjan Bharti. He further adds, “Our young generation completes courses in Engineering, Medical, Computer and armed with their respective degrees they prefer to work in foreign countries. Why do these new generations do not want to work in India? The film delves on this issue and make the younger one’s put on their thinking cap to reconsider about their choices. This 2-hour film has been extensively shot in Mumbai, Delhi and Jharkhand and is slated to release worldwide on 15th December this year.”

Ekaansh Bhaardwaaj, Sonia Linares, Jeet Rai Singh, Sanaya Sharma,Khushi Dubey, Arti Gupta, Vipin Panigrahi and many others are in its cast. Based on a script by Manish K.P. Yadav, the film has lyrics by Dhananjay Bhatt and Raj Verma has provided its musical compositions.