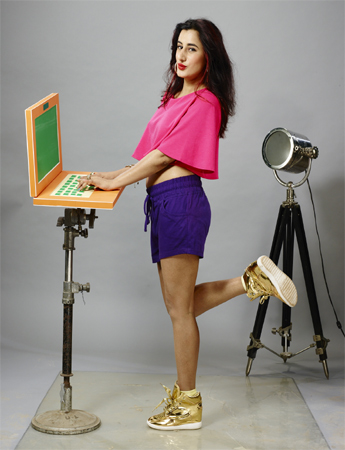 Actor, Saloni Chopra who plays the role of a TV show producer in MTV Girls On Top, Isha is currently going through an emotional rollercoaster ride because of her  tumultuous relationship with Sahir Bhasin, played by Shantanu Maheshwari. In the latest episode, the scene required both Saloni and Shantanu to be intensely close to each other and this made Saloni a little conscious. However, Shatanu made Saloni feel comfortable and they put their all into the scene and it came out beautiful.

Saloni said, “Shooting an intimate scene gets a little awkward of course, because it’s not what it looks like. There’s a lot of technicality involved in it. There’s people around you. You’re being directed – it’s more mechanical than passionate. So while it’s awkward, it’s also extremely great as an actor if you want to challenge yourself with it!”

MTV Girls On Top is all about three girls who try to entangle life’s complexities and overcome obstacles in their path to achieve their goals. All three main leads in MTV Girls On Top: Saloni Chopra, Ayesha Adlakha and Barkha Singh are currently trying to sort out their complicated love lives.