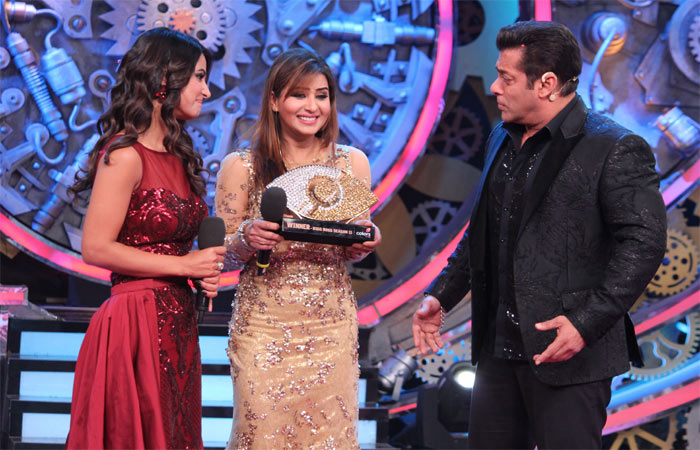 In the end, there can only be one winner…  After capturing the imagination of audiences nationwide with never seen before content encompassing hot tempers, emotional tears and unlimited drama; the 11th season of COLORS’ marquee show Appy FIZZ presents Bigg Boss powered by OPPO Cameraphone, Intellegently Secured by CP PLUS concluded on a high tonight. In what could only be called a tumultuous journey, Shilpa Shinde played the game, aced the tasks and survived in a house full of strangers to walk away today as the Winner of Bigg Boss 11. With the coveted Bigg Boss trophy presented by the host, mega star Salman Khan and a prize money of INR 44 Lakhs – Shilpa Shinde claimed the winning position, Hina Khan was declared as the runner up and Vikas Gupta secured the third spot. Bigg Boss 11 started as the battle between the Gharwale and their Padosis and culminated in a star-studded evening with enthralling performances.

As Shilpa Shinde walked through the doors of Bigg Boss 11, she was weighed down by the baggage of being India’s favourite Bhabhiji. Faced with her biggest nemesis Vikas Gupta on Day 1 itself, Shilpa never shied away from telling her side of the story. Funny, quirky and full of life, Shilpa soon proved to be one of the strongest contenders of this season. Her equation, constant battle and finally, friendship with Vikas Gupta kept made her popular with the viewers, thus earning her the love and respect of the entire nation. As she progressed from being a bhabhi to taking on the mantle of being a Maa, she beautifully showcased her true self and continued her struggle in the house. Her humility and mature outlook also won her appreciation and respect from host Salman Khan. Undermined and misunderstood, Shilpa was often blamed for not partaking in any task, but she managed to stay true to the game and proved herself able as the the winner this season.

Commenting on the victorious moment, Shilpa Shinde said, “To be able to hear your name in the voice of Bigg Boss as a winner is the best feeling that one can ever experience. It is a show that has made me more respectful towards myself. I have learnt a lot on this show and more than that I have grown stronger as person and as a human being.  The immense love and warmth from a lot of people has got me here to this stage. I had decided that if ever in my life I would need any kind of support, I would turn to Salman Khan, but destiny had other plans and ultimately brought me here at this juncture. I am I l overwhelmed at this moment and I’m glad I had this opportunity to work with Bigg Boss 11 and COLORS”

Commenting on the Grand Finale of Bigg Boss 11, Manisha Sharma, Programming Head – COLORS, said, “This season has been the most challenging and exciting for us and the benchmark for yet another big season is set for next year”

Abhishek Rege – CEO, Endemol Shine India said, “The season has been extremely gratifying and exhilarating. We brought alive a theme that had, not one but two parallel ecosystems running simultaneously. We would like to congratulate Shilpa Shinde for winning the show and a big thank you to all our viewers for their unending support in making Bigg Boss 11 a massive success.”

The Grand Finale of Bigg Boss 11 was a night to remember! With a gamut of extraordinary performances and spellbinding acts, the evening saw the best of Bollywood and TV come together for an entertainment extravaganza. As ‘Swag Se Swagat’ echoed through the walls one last time, Salman Khan shook a leg with the Top 4 finalists’ Shilpa Shinde, Hina Khan, Vikas Gupta and Puneesh Sharma. Adding to the star power, Superstar Akshay Kumar graced the finale episode; as Akshay entered the house to evict a contestant from Top 3. Ex-contestants Hiten Tejwani and Arshi Khan sizzled the stage with a romantic dance number, as Priyank Sharma and Luv Tyagi brought in some high energy with their dance moves. Dhinchak Pooja, Sapna Choudhary, Benafsha Soonawala were also part of this gala event.

Bigg Boss 11 will be replaced by the hilarious sitcom – Belan Waali Bahu on the weekdays starring television diva Krystle D’Souza and writer/producer turned actor Dheeraj Sarna while Rising Star 2 returns to add to the musical quotient on the channel on the weekends with Shankar Mahadevan, Diljit Dosanjh and Monali Thakur. 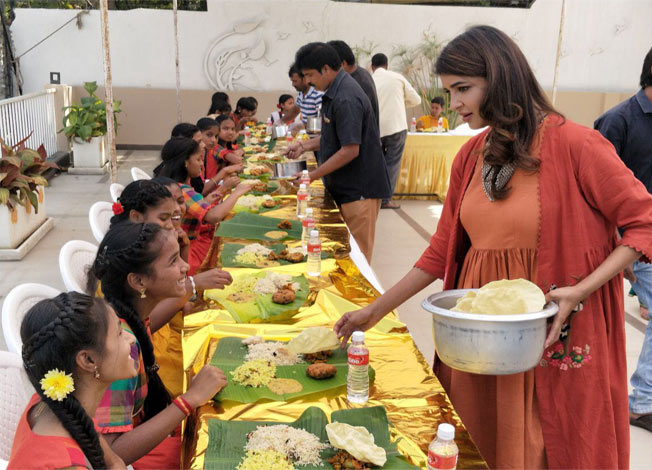