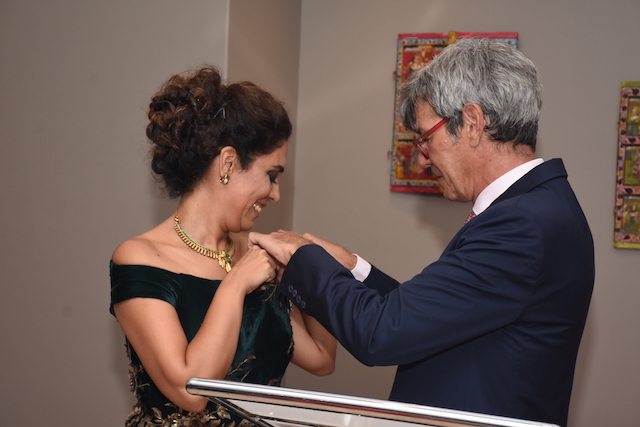 Filmmaker and artist Shona Urvashi has been conferred with the prestigious “Chevalier de l’Ordre des Arts et des Lettres”, France’s highest cultural award for her contribution to bringing the new wave of independent cinema in India and improving the ease for foreign films and talent to work in and with India.

The Consul General of France, Mr. Yves Perrin, bestowed the honour on the Indo-Canadian filmmaker and mentor in an intimate ceremony at his residence on Monday evening.

Shona’s work as a filmmaker spans across countries where she has curated and executed many cross-platform project and ad campaigns. Perhaps her most impactful, yet least publicized contribution to the film industry has been her passion for helping independent filmmakers network with national and international film communities, and in promoting foreign projects to film in India while striving towards more collaborative efforts using homegrown talent.

While talking about her role as a facilitator and mentor, Mr. Perrin said, “While most people know Shona as a filmmaker and advertising professional, very few know of this aspect of her life. Quietly, behind the scenes, building bridges for others to find success, recognizing cinema as a cultural ambassador she continues to strive to increase the chances for contemporary narratives arising from India to cross over.”

Speaking eloquently about her love for cinema and her cultural journey till date, Shona Urvashi reminisced her connection with France to when her grandfather Parmanand Anand traveled the fair land, distributing Indian films.

“There is an innate awareness, sensitivity the French have to the need to preserve and document culture and history through the arts. I deeply share the same values and believe that through our collaboration with each other, there are more dynamic conversations to be had, many exciting projects we must do together and so many new people on both sides just waiting to discover the other for better opportunity for all,” feels Shona.

While talking about the significance of art for her, she said, “The arts, for me are an important cultural ambassador, they translate similarities and differences between us, so we can learn from each other.”

The ceremony concluded with the ceremonial champagne toast to the lady of the hour with friends, family and admirers in tow.