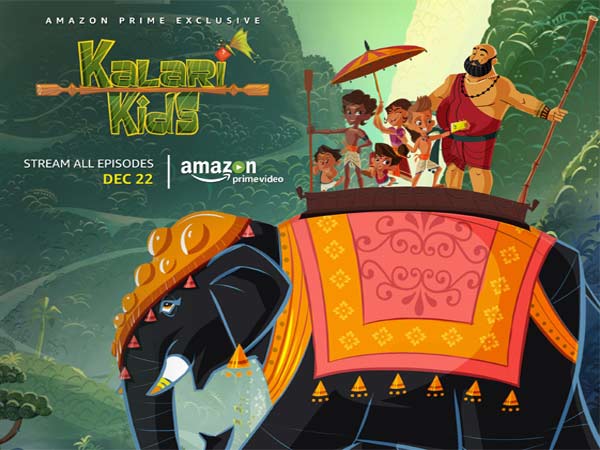 The ‘Smile International Film Festival for Children & Youth’ (SIFFCY) and Amazon Prime Video present the World Premiere of their upcoming show – Kalari Kids, created and produced by Green Gold Animation. It is a comedic adventure created especially for the children in the age group of 6 to 11 years.

All episodes of Kalari Kids will stream exclusively on Amazon Prime Video from the 22nd of December, 2017. Created in 2D animation, the graphic style of the show is reminiscent of the beauty, sophistication and stylization of traditional Kerala paintings.

The visual direction for Kalari Kids is inspired by the vibrancy of traditional Indian paintings. Each scene of Kalari Kids will essentially be a compelling illustrative still, styled with high contrast and traditional Indian patterns. Beenu, Unni, Ami and Shyam are four students in the Gurukul of Guru Palan along with three friends Meena they face new adventures every day: either lessons from their Guru about the value of tradition and good behavior or challenges from their rival.

Kalari Kids is scheduled for two show screenings at the week-long festival, while the trailer will be showcased 25 times during the third edition of the ‘Smile International Film Festival for Children & Youth’ (SIFFCY). The festival kicked-off on the 11th of December and will continue till 17th December, 2017, at Sirifort, New Delhi.

This edition of SIFFCY will have a special focus on Dutch cinema. Top-10 Dutch films have been curated especially for the festival and will be presented by Gert Herman, from the European Children’s Film Association. The children’s festival has received over 2000 entries from more than 100 countries. SIFFCY will highlight issue of cleanliness, environment and climate change through a special selection of films and discussion forums called – ‘SIFFCY goes Green’, to create awareness on environmental issues amongst children and youth.