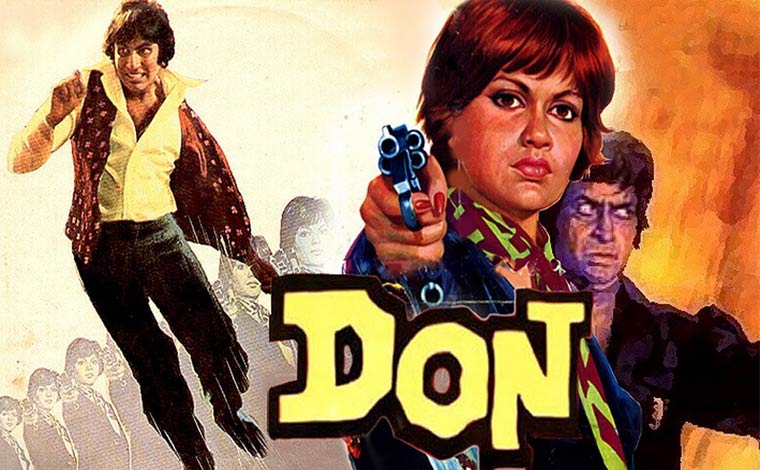 When we think of the films from the 70s era, we are transferred to a world that saw the birth of new genres of movies – be it action, thriller or musical. One such film, a masterpiece that stands out for being the perfect blend of action, thrill, music and dialogues is the Amitabh Bachchan, Zeenat Aman starrer Don.

Don is a crime thriller set against the backdrop of Mumbai’s underworld and revolves around Vijay, a Bombay slum-dweller who resembles the powerful crime boss Don and is asked by law enforcement officer DSP D’Silva (Iftekhar) to masquerade as Don, in order to act as an informant for the police and track down the root of the criminal organization.

For those born in the 60s-70s era, Don was the perfect example of flower-power with an adrenaline rush, be it Roma (Zeenat Aman) who could be the girl next door and a deathly assassin with the same élan or the poor guy Vijay (Amitabh) as the one and only DON.

One cannot forget the stellar star cast supported by Pran, Iftekhar, Helen, Om Shivpuri and Satyen Kappu who served powerhouse performances making Don one of the highest grossing films of 1978, with Amitabh Bachchan bagging the most coveted Filmfare Award in the Best Actor category.

This is the film that saw the best in fashion with stylish bell bottoms, polka dots and tinted glares, best in music with Yeh Mera Dil and Khaike Paan Benaras Wala by Kalyanji Anandji, the best in action sequences and car chases and not to forgot one of the most iconic dialogues till date, ‘DON ko pakadane ki koshish 11 mulkon ki police kar rahi hai, lekin DON ko pakadna mushkil hi nahin namumkin hai!’. Don is what we call the prefect dinner spread with the right ingredients.

Tags:
Previous Article
This Mother’s Day thank your moms for being 110% Super Maa
Next Article
‘Bring the Stadium Home This Cricket Season’ With Amazon.in

‘Bring the Stadium Home This Cricket Season’ With Amazon.in
MediaInfoline May 09