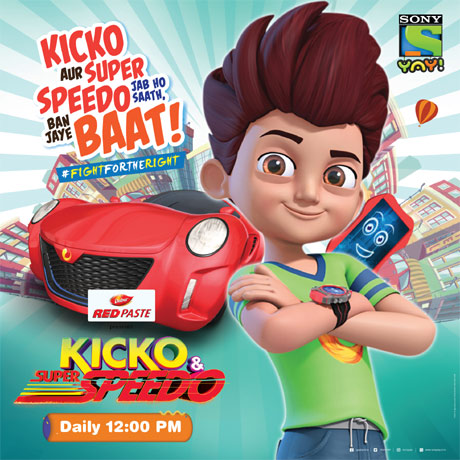 Friendships, comedy, adventure, Sony YAY! offers shows across a variety of genres and with KickO and Super Speedo, the channel now adds another one to its varied bouquet of shows. With the line-up of 52 adventurous episodes, KickO will roll its first season this year. While Sony Pictures Networks India owns the show IP, the production of this incredible series is done by one of the country’s finest animation production house – Green Gold Animation.

With an aim of giving kids a best friend like never before, a character who will be close to kids’ hearts and a role model who they can look up to, Sony YAY! Introduces their new superhero – KickO. Not only this, KickO owns a special remote-controlled gadget- Super Speedo, a smart car that emerges from KickO’s wristwatch named ‘R7’. Super Speedo is possibly the smartest car which has ever been imagined. It runs on cosmic energy and is interfaced by a tablet named-Tab O. It is fitted with all possible gadgets of defense and can turn itself into an aircraft, a submarine or a speedboat.
While KickO is a well-intentioned kid when the situation demands him to fight, he fights for justice with his kicks, hence the byline of this series -“Fight for the Right”. In his repertoire of kicks, KickO has an O kick which is possibly the most powerful kick that exists. The kick is so powerful that it creates a circle of fire visually seen as the alphabet O.
Achieving the position of the highest rated show in the 1st week of its launch, KickO and Super Speedo promises an extra dose of entertainment through a catchy theme song titled ‘Jeet Wala Geet’. With captivating tunes and singable lyrics, the song has instantly caught on to children across the country. Not only this, the theme song of the show “KickO And Super Speedo” received a stupendous response with 1.5 Million views in only 2 weeks. And all this in two weeks of the show launch!

Ronojoy Chakraborty, Head of Programming, SPN Kids Genre commented, “The germ of thought for this particular show came from an extensive research from our target audience, that kids love wrist watches and remote controlled cars. Apart from that, they love having a role model, especially if it is someone who stars on television. This is the first show that showcases a seven-year-old boy having a car – a dream everyone has as a child. Everything from KickO’s car to his watch to the relationship he shares with his friends is something kids will associate with. The show is an action comedy and with kids’ fondness for this genre, introducing this genre to our programming wasn’t a debate. Green Gold Animation is one of the best animation companies in the country. To deliver such animation, there was no second thought on who we wanted to partner with. They have the capacity and understanding to create this level of animation, and we have seen it with the work they have done”.

Rajiv Chilaka, CEO, Green Gold Animation, said, “Indian animation sector has bright future and is growing tremendously. KickO and Super Speedo is a great addition to our portfolio. Along with Sony YAY! we are offering kids exactly what they want. The shows that Sony YAY! produces are completely in line with what kids want and being associated with this genre ourselves, it is only an honour to be working with them. We are excited about this partnership and are even more eager to bring to kids some high-quality 3D animation. The show is packed with action, humour, friendship, and lots of fun!”