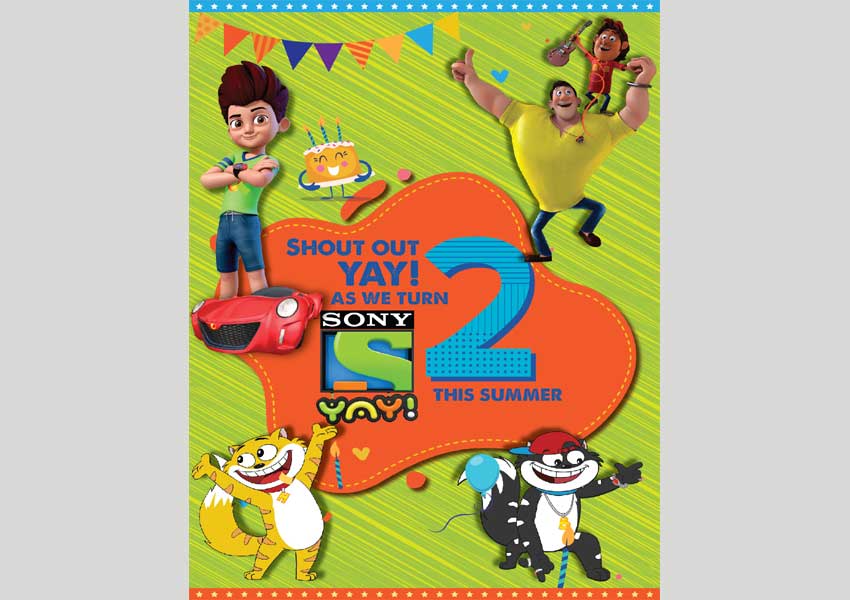 Sony YAY! kick-started its summer activities with their birthday bash, courtesy the ‘YAY! Day My Day!’ campaign on-air. With an objective to celebrate their 2nd birthday, the channel gifted its young audiences a unique chance to decide the content line-up for their favourite channel. The Idea was to let kids take over the channel for a day, and let them watch the shows of their choice. Young fans simply had to vote for their favourite toons via the Sony LIV app (https://t.co/UYR9JJJ9fT) and voila!

Sony YAY! launched in 2017 with almost 95 hours of content. With kids wanting to watch more of their favourite toons, the channel with a bank of over 300 hours of content will be giving them a double fun-dose this summer as it readies itself to release over 100 hours of fresh content this year. Kids will be treated to brand new episodes of the coolest kid in town and his gadget-filled supercar – Kicko & Super Speedo. Not just that, the boy with the coolest swag will be seen fighting evil, for the first time in four brand new movies – Kicko V/S Shrinko, Kicko and Super Speedo VS Benaam Woh, Kicko and Superspeedo in Return of The Devils and Kicko and Superspeedo in Future Man Attacks. The mischievous feline duo undergo a revamp as ‘Sab Jholmaal Hai’ gets renamed to ‘Honey Bunny Ka Jholmaal’ with the fresh set of episodes. In all, Sony YAY! will air 13 new movies to enthral kids. With tons of action, rib tickling comedy and laugh out loud moments, the new movies are bound to leave the kids spellbound.

Sony YAY! is the only kid’s TV channel that serves content in 7 languages – English, Hindi, Tamil, Telugu, Bangla, Malayalam and Marathi. Toons are kid’s best friends and naturally its more comfortable for them to engage with them in their mother tongue. Speaking to them in a language they are more comfortable in, helps them build an everlasting bond and relate better. Keeping this in mind, Sony YAY! has made conscious efforts to provide content in multiple language feeds, resulting in it being in a leadership position in the kids’ category in West Bengal, Maharashtra and Kerala.

Sony YAY! endeavours to ensure that it brings kids favourite characters across every platform that kids are on. With kids getting increasingly tech savvy with an access to hand-held devices at a very young age, the channel has ensured to give kids their favourite entertainment on the go. With fresh and engaging new games on mobile devices, a host of fresh and exclusive content for the Sony LIV! app, the channel ensures that kids get their YAY! dose on the move.

Offline too, Sony YAY! has a plethora of initiatives planned to keep kids engaged with their favourite toons across India. Malls in Mumbai, Delhi, Chennai, Kolkata, Chandigarh, Ahmedabad, Lucknow and Kochi, will allow kids to meet their favourite YAY toons up-close and personal! Sony YAY! van activation across India to more than 115 cities, will ensure that the fun-filled characters meet and play with as many young fans. Not just this, associations with a host of brands, amusement parks, and a slew of merchandize will ensure kids everywhere go YAY!

The intention is to build an ecosystem around kids where they meet and engage with their favourite Sony YAY! characters across the day,from using Honey Bunny products at home to singing and dancing with Kicko in their nearest mall. Playing character based games to watching various other digital content on the move.

Leena Lele Dutta, Business Head, Sony Pictures Networks India, Kids Genre commented, “We started with a belief to create characters and stories that kids will love. It has been an exhilarating journey to be a part of kid’s lives. This summer we have planned loads of fresh content with 109 new episodes and 13 movies on TV. The characters however are character agnostic and every new platform is an avenue to bring toons to life beyond just TV. Seven language feeds, digital extensions and consumer products are all a step towards a new phase of our journey and we have never been more excited.”