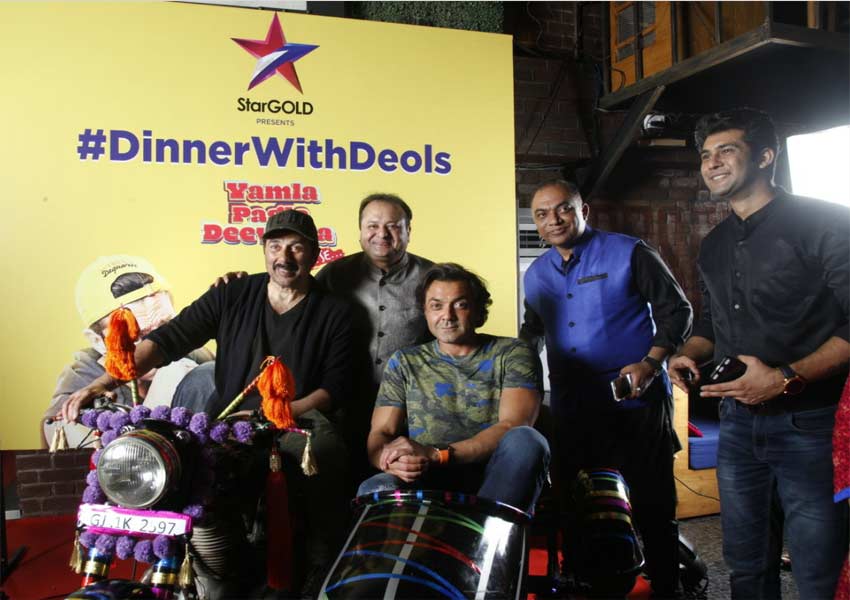 Star Gold celebrated the World Television Premiere of YamlaPaglaDeewanaPhir Se by organising a special event – #DinnerWithDeols. In a once-in-a-lifetime opportunity, fans met and conversed with Sunny and Bobby Deol over dinner and refreshments. Furthermore, highlights of the event were streamed live via Facebook and Instagram, making it possible for thousands of fans online to join in for #DinnerWithDeols.

Staying true to character of the film, this dinner reflected the famous Punjabi MehmaanNawaazi. Sumptuous Punjabi food and heart-warming exchanges of love between the fans and the stars were the highlights of the evening. Right from a young fan singing songs for the Deol brothers, to a man gifting a beautiful painting, to a woman having the Deol brothers chat with her mother in Kolkata over a video-call, the evening was filled with many such endearing moments.

Touched by the outpouring of the fans’ affection, Bobby Deol said, “It was a great opportunity for us to meet and connect with fans. Often times, it is difficult to respond to each fan individually, but a platform like this enables us to meet our fans on a one-to-one basis. Thank you, Star Gold, for this thoughtful initiative.” Sunny Deol added, “It was a lovely way to celebrate Diwali with fans over dinner and conversations.”

The beautiful evening ended with the stars raising a toast with the fans to the premiere of the film on Star Gold. Speaking on the initiative, Hemal Jhaveri, Executive Vice President, and General Manager, Hindi movie business, Star India said, “Star Gold has always strived to bring fans closer to stars. An initiative such as #DinnerWithDeols is once in a lifetime opportunity for fans to meet and interact with their favourite stars face-to-face. We are truly thankful for the support Sunny Deol and Bobby Deol extended to our initiative, making it a grand success.”