Star World Has Come Up with its Special Programming line-up 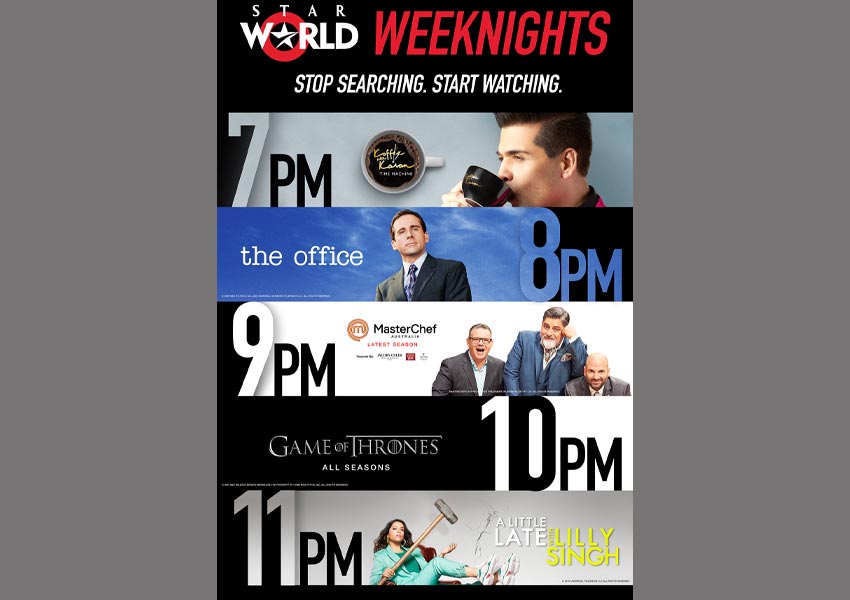 With an expansive & abundant array of content on television, we are left with too many choices and very little time to choose what to watch, especially with our busy work schedules and the fight for some family time. In-light of this daily endeavor of keeping one entertained, Star World, has specially curated an unbeatable special programming line-up with the world’s best English content! So, stop searching and start watching these awesome shows that are sure to bring umpteen laughs and gasps across all living rooms in the country.

After coming back from work, each hour of the weeknight is filled with some of the most extraordinary shows one after the other and some have even gathered a cult status among television enthusiasts.

Starting the weeknight programming is India’s guilty pleasure Bollywood talk show ‘Koffee with Karan’ at 7 PM. Hosted by Karan Johar, this show that has gained the cult status in the Bollywood industry, takes fans down memory lane through their favorite moments with their favorite B-Town celebrities! Catch the show in an all new avatar – Koffee with Karan – The Time Machine only on Star World at 7PM on all weekdays!

World’s most loved mockumentary that’s sure to take you away from the mundane 9-5 life and into a comic roaster and a nutty hilarious 9-5 – ‘The Office’ (U.S.), all 9 seasons has made its way to Star World’s bouquet of offerings. The show that has garnered 188 nominations and 47 wins during its 8-year run, will air all week-nights at 8PM!

Gather your family & friends to experience some masterful cooking with India’s favorite cooking show and celebrate the last season with their favorite judges – ‘MasterChef Australia’ latest season at 9PM! And that’s not all! Looking for some drama? The world’s most phenomenal fantasy series ‘Game of Thrones’, that has broken records of garnering the highest number of nominations & wins for a single series, comes to your screens with all 8 seasons at 10PM only on Star World.

While these shows are sure to give you some laugh, some drama, and some cooking tips, Star World brings India’s favorite YouTuber-gone-global, Lilly Singh with her all new Hollywood talk show – A Little Late with Lilly Singh at 11PM!

Tune into Star World to watch the Special Programming and stay connected with the one-stop shop for all things entertainment!