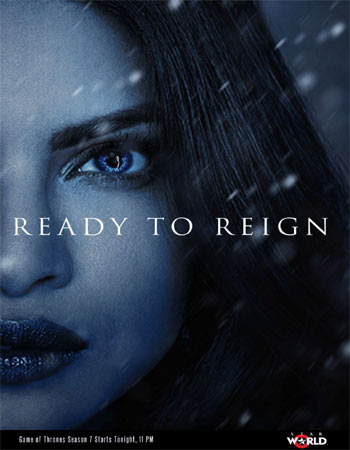 The great war is finally upon Westeros as the much anticipated first episode of Game of Thrones premiered on Star World last Tuesday at 11 PM. In order to promote the launch, Star World undertook a mammoth digital campaign to engage with fans. By tapping into current trends on social media and capitalizing on three focal crowd-pullers: selfies, user-generated content and customization, the brand opened doors to the Game of Thrones universe for Twitterati fans of the series.

Undertaking a real time digital activity, Star World invited fans on Twitter to send in a selfie with the hashtag: #GOT7onSW which they then transformed into a personalized Game of Thrones season 7 campaign poster.

The channel went on to receive a response that not only re-affirmed the cult status of the show but also love for the brand. Star World India trended worldwide and #GOTS7onSW trended in India for 11 hours with Star World receiving over 25,000 tweets. The fervor, however, didn’t stop as the activity garnered an estimated 161 million impressions with over 3000 personalized posters being rolled out on a real time basis. Influencers like Aashka Goradia, Atul Khatri, Madan Chikna and Pakchikpak Raja Babu got their own personalized posters. Star World also engaged with birthday girl Priyanka Chopra by tweeting out birthday wishes to her through the personalized poster. Indian media, too, supported the initiative with complete enthusiasm.

Star World truly engaged with fans in a unique manner by giving them a chance to be a part of the Game of Thrones universe thereby creating new marketing benchmarks for the show.