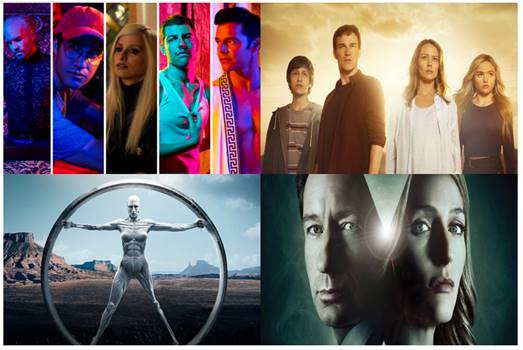 Instead of rifling through an endless number of shows and struggling to pick one, let India’s leading entertainment channel – Star World help you out! Just sit back, relax and indulge as Star World showcases a carefully curated list of critically acclaimed, award-winning and star-studded shows that will not only entertain you but will also help you be a part of the trend!

The slot called ‘Star World Recommends’ will launch on 16th April and will bring shows like The Assassination of Gianni Versace – American Crime Story, Westworld, The Gifted, 9-1-1 for the first time to India,every Monday to Friday at 9pm.

Kick-starting the line-up is the critic and audience favourite series The Assassination of Gianni Versace: American Crime Story! Hailing from the multi-award winning director Ryan Murphy, the series is a spectacle offashion, luxury, power and even murder. A deeply moving account of Andrew Cunanan, the murders he committed, the killing of the fashion industry’s biggest icon – Gianni Versace and the coming into power of Donatella Versace, the series has been lauded by one and all! What’s more? It is packed with power performances by Academy Award winner Penelope Cruz as Donatella Versace, Edgar Ramirez as Gianni Versace, critic favourite Darren Criss as murderer Andrew Cunanan, Ricky Martin as Antonio D’Amico among others! ‘The Assassination of Gianni Versace: American Crime Story’ premieres on Star World, on 16th April, Monday to Friday at 9 PM!

Next in line is the American procedural drama 9-1-1 created by television’s dream team comprising of Ryan Murphy, Brad Falchuk and Tim Minear! Fast-paced and complete with drama, the series explores the lives and careers of first responders – including police officers, paramedics and firefighters – the individuals who put their lives on the line every day to save others.9-1-1 stars a stellar cast comprising of Underworld fame Oliver Stark, Nashville, American Horror Story and Friday Night Lights fame Connie Britton, Parenthood actor Peter Krause and Tinsel Town’s favourite Angela Bassett among others! 9-1-1premieres on the 27th April at 9 PMon Star World.

The Resident is the journey of an idealistic young doctor whose notions about good and evil transform under the supervision of his brilliant and tough senior resident. Starring Matt Czuchry of Gilmore Girls as the senior resident and Manish Dayal from Agents of Shield as the idealistic doctor, this series takes a refreshing spin on a conventional medical drama. The Resident premieres on 11th May at 9 PM on Star World.

Marvel expands its foray into the sphere of television withTheGifted – a family sci-fi series that revolves around an ordinary suburban family whose lives change course forever when they discover their children have developed mutant powers. An intriguing plot thatfollows the journey of mutants fighting against a malicious government, makes this action-packed series a must-watch! Moreover, ‘X-Men’ alums Bryan Singer, Lauren Shuler Donner and Simon Kinberg are among the executive producers of the series and it stars Once Upon a Time, Sucker Punch, The Hangover III fame Jamie Chung, Switched at Birth fame Blair Redford, Person of Interest actor Amy Acker among others!Marvel’s The Gifted premieres on the channel on 31stMay at 9 PM.

Following suit is a workplace comedy series Ghosted! With Big Little Lies actor Adam Scott and Craig Robinsonof The Office fame steering the course of the series, Ghosted has turned out to be an exceptional show with an extraordinary plot-line! When the lives of a former detective Leroy Wright, a skeptic who doesn’t believe in aliens and Max Jennifer, a true believer who is convinced his wife was abducted them,clash, it leads to complete hysteria! The Ghosted will premiere in India on Star World on 21stJune at 9 PM!

One of the most awaited television series of the year, Trust, delves into the trials and tribulations of one of America’s wealthiest and unhappiest families – The Gettys. Created and developed by 8-time Academy Award winner Danny Boyle of Slumdog Millionaire and 127 Hours fame along with Simon Beaufoy, another Academy Award winner, the series is set in 1973 around the abduction of John Paul Getty IIIin Italy, then-heir to Getty Oil. Trust stars Hollywood A-Listers – Donald Sutherland, Hilary Swank, Brendan Fraser among others and will premiere on 13th July at 9 PM only on Star World!

The X-Files is a cult-hit with millions of zealous fans around the world. The latest seasonof the Emmy award-winning series brings back David Duchovny andGillian Anderson in their signature roles of Mulder and Scully. The sci-fi series takes a new twist with the premiere of The X-Files 2018 on 27thJuly at 9 PM on Star World.

Culminating this outstanding line-up is the HBO show –Westworld. Created by Jonathan Nolan, who co-wrote cinematic marvels such as Interstellar, The Prestige and The Dark Night series, this science-fiction drama stars Hollywood stalwarts such as Anthony Hopkins, James Marden, Evan Rachel Wood and Thandie Newton. Westworld is a futuristic amusement park where the visitors can indulge their every whim and fancy with a park full of automatons without any consequences. But what happens when their complex programming makes them sentient to human emotion? Watch the lines blur on 24thAugust, with the premiere of Westworld season 2 at 9 PM on Star World.

Carefully picked and painstakingly curated with precision for its viewers, Star World Recommends is all set to air only the choicest shows of global television, starting 16thApril, every Monday to Friday at 9 PM!